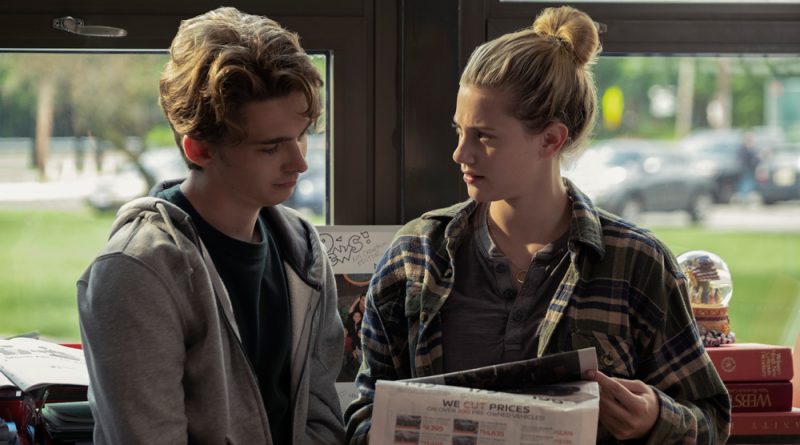 It just wouldn’t be summer without a teen drama to tug at our heartstrings. The latest is Amazon Studio’s Chemical Hearts, an irresistible love story directed and written by Richard Tanne (Southside With You).

This is a surprisingly, multi-layered teen movie about acceptance, tolerance and of course falling in love. Chemical Hearts benefits from its lead stars Austin Abrams (TV’s This is Us) and Lili Reinhart (TV’s Riverdale).

Henry is well liked at school and he loves to write. He’s looking forward to being the editor of the high school newspaper although his quiet and uneventful life doesn’t provide him much to write about.

While waiting in class to see if he makes the editorial cut, Henry notices his classmate Grace Town (Reinhart) reading a book and he introduces himself.

She’s nice but seems rather distant toward him and tells him that she wants to be editor of the paper too, but she has no intention of writing. Seems odd, but Henry initially doesn’t press the issue.

Grace is an around-the-way-kind of girl. She’s older than Henry and has experienced life outside of his quaint suburban world.

So naturally they’re going to get together right? Opposites attract.

Grace is different. She speaks her mind and what she says can be a bit harsh if you have thin skin. Grace also walks with a limp and cane, but she’s still a beauty to Henry and clearly has his full attention.

It takes a lot of work, but Grace lets Henry get close to her. Not too close though. Although she has a car, they occasionally walk home from school together. Eventually she lets him drive her.

Still, we don’t know much about Grace, her family, or her medical condition, but these issues are slowly revealed, and we discover the emotional pain Grace is suffering and why she keeps leading Henry on so much.

Even Henry’s older sister Suds (Sarah Jones, TV’s For all Mankind), who has recently experienced her own romantic heartbreak, is excited for her brother, but seems to already know how this might end for him.

But, when you’re in love for the first time, your mind is clouded with emotion and Henry can’t help himself. He lets his emotions get the best of him and pressures Grace to spend more time with him.

When they do, it doesn’t last long because Grace’s past continues to haunt her, and it ultimately prevents Henry from having that once-in-a-lifetime love he’s always dreamed about.

Chemical Hearts clocks in at a nifty 93 minutes and doesn’t overstay its welcome. Unlike other teen dramas, it’s not as predictable as you would expect. Although the film is rather dark and somber, it’s the compelling performances from Reinhart–who also co-executive produced the film–and Abrams that ignites Chemicals Hearts.