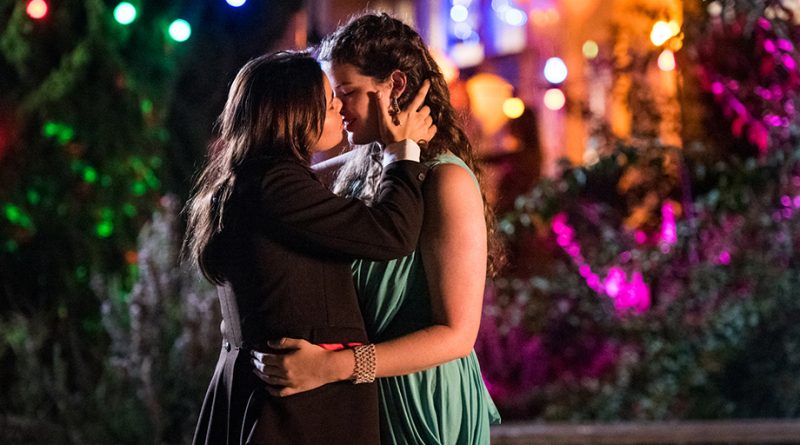 To call Australian filmmaker Monica Zanetti’s Ellie & Abbie (& Ellie’s Dead Aunt) a delight is an understatement. On one hand, it’s a wholly charming if not at-first seemingly pedestrian coming-of-age queer love story between two young high school girls in Sydney, the Ellie (Sophie Hawkshaw) and Abbie (Zoe Terakes) of the film’s title. But it’s when Ellie’s eponymous “dead aunt” Tara (Julia Billington) enters the picture that this seemingly light-hearted romantic romp finds its depths, tying the contemporary romance between the two young women to the very real story of queer activism in Sydney, with all its fire, passion, and, at times, tragedies and horrors.

Based on Zanetti’s earlier play, Ellie & Abbie (& Ellie’s Dead Aunt) is fiercely Australian and does not shy away from using local vernacular out of a culturally insecure fear of losing its appeal to an international audience; the film hinges around Ellie’s crush on Abbie and her desire to ask Abbie to the formal (in Australia, we don’t call it “prom” and anyone who suggests otherwise is a spy or a fraud). With the finely cast Hawkshaw and Terakes as Ellie and Abbie, Zanetti plots a sensitive and funny narrative as Ellie must not merely overcome her jitters but has to figure out if Abbie is even into girls in the first place.

Enter Aunt Tara: a self-identifying fairy godmother, the ghost of Ellie’s mother’s sister appears to Ellie to supposedly help the girl adjust to the life of the newly out. Explaining her role to her living niece, Tara says that her presence is one similarly bestowed on all young people with a gay relative who died before they were born and were unable “to pass on their wisdom”.

Whether Tara’s advice is “wisdom”, however, is up for debate, and aside from dealing with her mother struggling with her coming out, Ellie also has to contend with the ghost of a well-meaning but pushy relative offering her advice that may have been appropriate when Tara was alive, but now, at times, is awkwardly out of date.

But it is through Tara – and Ellie and Abbie’s discovery of her story – that Ellie truly discovers not just her sense of self as a young queer woman, but a strong sense of place. Although unspoken, the film references quite clearly the disgraceful so-called “Cleansing March” in October 1989 lead by fundamentalist Christian Reverend Fred Nile who sought to ‘reclaim’ the city’s famous inner-city Oxford Street which had been the home of the Sydney Gay and Lesbian Mardi Gras since 1978. The LGBTQI community fought back with force in the shape of an enormous counter-protest, which only further rallied to strengthen the bonds of that tied this community to Oxford Street and its now-world famous events specifically.

The first Australian feature film to open the Mardi Gras Film Festival in February this year, Ellie & Abbie (& Ellie’s Dead Aunt) played BFI Flare in London before most recently being screened as a program spotlight in the online version of the Melbourne International Film Festival. A touching queer love story set in the present that reaches back through the years to emphasize a largely now-forgotten moment in Australian LGBTQI history, Ellie & Abbie (& Ellie’s Dead Aunt) is as warm-hearted as it is an acknowledgement of the very real legacy of Australia’s queer activists of yore.