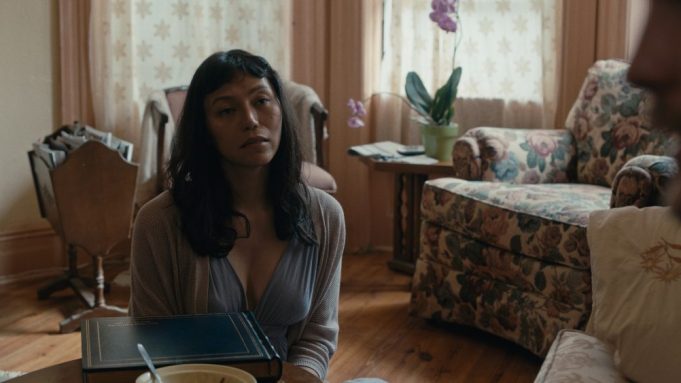 Lingua Franca is Sandoval’s somber, sobering and highly personal story infused by her own real life experiences as she plays Olivia, a post-opt Filipino trans woman, an undocumented immigrant living and working in Brooklyn. As a live-in caregiver for Olga, a fuzzy-headed little old Russian lady (Lynn Cohen), her Olivia is desperate to gain a green card in the anti-immigrant Trump era in which ICE agents roam the streets. She had been paying a guy to marry her but he backs out. All the while, her mother back in her homeland is waiting for money to arrive.

Hope kind of arrives in the guise of Olga’s fresh-out-of-rehab grandson Alex (Eamon Farren), who continues his boozy lifestyle while laboring at his uncle’s meatpacking center when he isn’t at the gym working out. There is a sort of Rocky Balboa attitude about him but he lacks the Italian Stallion’s charm and commitment to his goals. Of course, two lost souls like Alex and Olivia are destined to connect. It’s too bad that the pair only earns a C in chemistry.

Rather than tightening her narrative strands as her story wraps up, Sandoval lets matters unravel. While it’s admirable and brave of her to address such hot-button issues as one’s sexual identity and the fears of those whose path to citizenship is needlessly blocked, Lingua Franca could have expressed so much more to allow those who see themselves in Olivia to truly connect with her film.