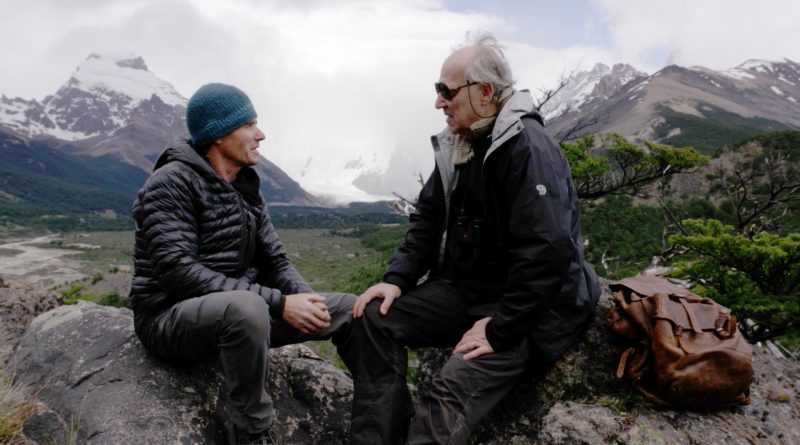 You can see why Werner Herzog and Bruce Chatwin would be fast friends, given their shared fascination with all things weird and wonderful about this planet.

Nomad: In The Footsteps of Bruce Chatwin is Herzog’s new documentary about his dear friend Chatwin — bon vivant, traveller and author of In Patagonia, Utz, What Am I Doing Here and The Viceroy of Ouidah, among other books. The film is an homage to friendship, travel and the art of storytelling and it’s as much about the filmmaker as it is about Chatwin; what a bonus.

Like other of Herzog’s more recent documentaries, Nomad feels very much like a comfortable conversation with an old friend who happens to know gobsmacking things.

Nomad is divided into eight chapters, beginning with a bit of Chatwin childhood history (“Skin Of The Brontosaurus”) and tales about shipwrecks and Patagonia and how both men have travelled in that part of the world. According to the film,Chatwin’s wanderlust and keen interest in all things related
to human existence began with the artifacts and curiosities in his grandmother’s glass cabinet.

Herzog retraces some of Chatwin’s travels in Nomad. That takes us to a mysterious Neolithic monument in Avebury in the south of England, where the stone circles radiate paranormal energy. There are visits to Wales, Argentina, Australia and more.

According to Herzog, he and Chatwin met in 1983 in Australia, where Herzog was filming and Chatwin was
researching the dreaming tracts of the aboriginal people for his book, The Songlines. The two storytellers immediately became friends.

Other colleagues and loved ones interviewed in Nomad include Chatwin’s widow, Elizabeth Chatwin, and his biographer Nicholas Shakespeare; University of Sydney Anthropologist Petronella Vaarzon-Morel talks about Chatwin’s “pursuit of weirdness”, but you can tell she means that in a good way.

Watching Nomad is not unlike gazing through a kaleidoscope for 90 minutes. Somehow giant sloth feces, cave paintings, the last nomadic people of Tierra del Fuego, Theodor Strehlow’s book of secret Aboriginal knowledge and footage of Klaus Kinski running wild on the set of Herzog’s Cobra Verde (a film based on Chatwin’s Viceroy of Ouidah) whirl past, all fitting together perfectly.

The thread throughout is the connection between mysterious places on earth — magical landscapes — and the soul, a theme investigated more thoroughly in a section of the movie involving Australian Aboriginal elders.

Herzog is moved to tears in a section of Nomad devoted to Chatwin’s leather rucksack, a memento of his late friend. (Chatwin died of AIDS in 1989.) The filmmaker had the central character in his 1991 movie, Scream of Stone, wear Chatwin’s backpack throughout the movie.

Nomad, which features the transporting music of Dutch cellist Ernst Reijseger, is not so much a biopic as it is a celebration of a unique mind and an important friendship.

Herzog himself called it an erratic quest. In the film he describes Chatwin’s storytelling, with all its embroidery and embellishment, as “a truth and a half” — which is exactly what he has achieved here in Nomad.

The best thing about this lovely film is that it may well inspire the uninitiated to look further into the work of both Herzog and Chatwin.