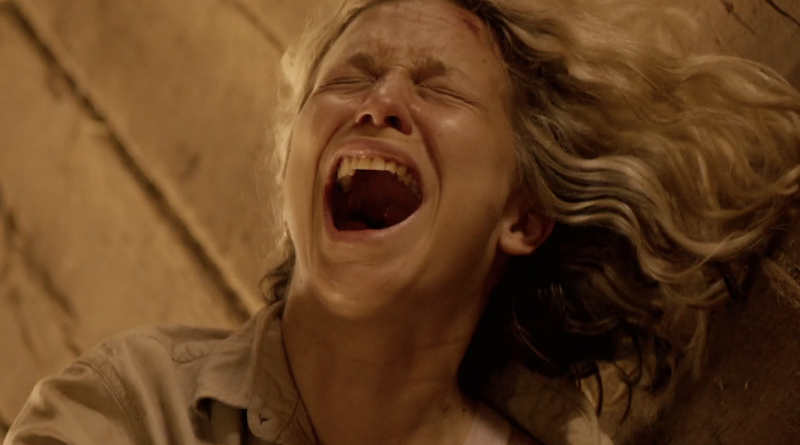 Ravage, the new movie from director and screenwriter Teddy Grennan (Among Ravens) isn’t for everyone. It is a gruesome, violent, sadistic actioner that might even make Quentin Tarantino wince.

Once you start watching Ravage there is no turning back. Credit that to Annabelle Dexter-Jones (TV’s Succession), the film’s fierce heroine, who holds her own against the bad boys although you wouldn’t know it at first when the film opens.

That’s because when we first see Harper Sykes (Dexter-Jones), she’s laying in a hospital bed bandaged from head-to-toe unable to tell the unsympathetic detective Slayton (Michael Weaver, TV’s Diary of A Future President) what happened.

He assumes that Harper might be one of those wacko meth heads who decided to hang out at the Watchatoomy Valley, a supposedly woodsy area that attracts all sorts of crazies.

Then the film cuts to Harper before she landed in the hospital. We see that she’s a young, renowned nature photographer on assignment.

While working, Harper notices a man being beaten and whipped by some thugs. She’s shocked and runs for help. But the guys see Harper and go after her.

Little do they know that not only is this woman an amazing photographer, she’s also a trained survivalist and for a while is able to escape them.

When she returns to the police department and tells Officer Slayton what she saw, he insists she show him where it occurred.

Will Officer Slayton do the right thing and take care of the situation. Nope. Turns out, he’s working with the capturers and their ringleader, Ravener, (Robert Longstreet, Judas and the Black Messiah).

It seems that they are angry about people coming in and trying to take their property. Even Bruce Dern is part of this motley crew.

Officer Slayton takes Harper to a barn where the other men are, and they tie her up and abuse her.

However, Harper escapes and gets even by outsmarting, beating, shooting, and even beheading one of the guys in the process.

If you’re trying to make sense of it all, don’t. Ravage is mindless entertainment and is best enjoyed when you suspend all disbelief and simply go with its frenetic flow. It is what it is.