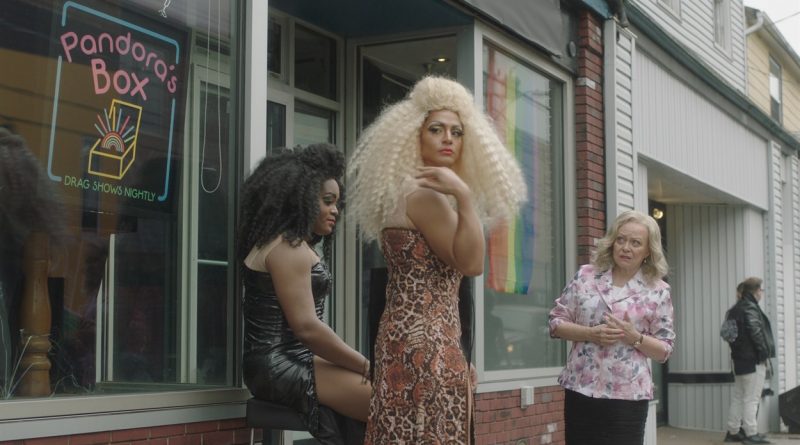 For the last few elections, polls reveal that what Americans want most is for people of different sides to start working together. And in the last few years, Americans say they want the divisiveness in America to end. An odd, heartwarming musical comedy with a gun-toting grandma and an entourage of drag queens is the first drop in the bucket that shows maybe there is a way.

Stage Mother greets conservative church choir director Maybelline (Jacki Weaver) as she learns about the death of her estranged gay son, Ricky. Against her domineering husband’s wishes, she flies to San Francisco to attend his funeral. Once there, she runs up against the resistance of Ricky’s friends at the same time she learns that she’s inheriting his drag club. Maybelline realizes she has a lot of work to do: improve the club’s attendance, improve her relationship with her son’s life partner (Adrian Grenier), and improve herself.

The premise is ripe for a reality TV social experiment: what happens when you put a Texas belle who packs with San Francisco drug-snorting drag queens? But instead of wig pulling nastiness, it grows beautifully into a story about the importance of love, tolerance, and understanding.

It’s a lovely idea, but it is a fantasy — each side warms up to each other a lot quicker than could possibly be expected after years of walls, prejudice, and earned hurt. Maybelline becomes a club mother to the group, picking up on their problems, doling out advice, helping them work through problems that have been decades in the making. Moreover, it’s the fantasy of the aging woman: that our contributions, insights, and advice we’ve gathered over a lifetime aren’t dismissed by eye-rolling adult children or marginalized by the organizations where we volunteer, but valued. We make a difference. People listen to us.

In Maybelline’s case, she’s able to take her years of leading the church choir to transform the drag club into a popular venue and make positive change in the lives of her son’s friends. Weaver delivers Maybelline as a gentle, tactful spirit who is shaken to realize that ostracizing Ricky didn’t make him change, it just cheated her out of time they could have spent together. Weaver’s sincerity is heart-rendering, and the plea is clear: moms, don’t let this happen to you. With the musical finale that’s campy, cheesy and also overwhelmingly touching, it’s inevitable it will move at least a few families to be reunited.

The film has its issues. Weaver, Lucy Liu and real-life female impersonator Jackie Beat can turn any line of dialogue into a clever laugh-out loud moment — as long as you find sexual innuendo hilarious. Adrian Grenier, however, is miscast as Ricky’s partner in love and business — not only is there no authenticity, there’s no acting talent. At times, the script is crisp, and at others, it drags (enjoy the pun).

Stage Mother is an unexpectedly warm yet ribald comedy that demonstrates what can be gained from giving up the hate and turning up the love.