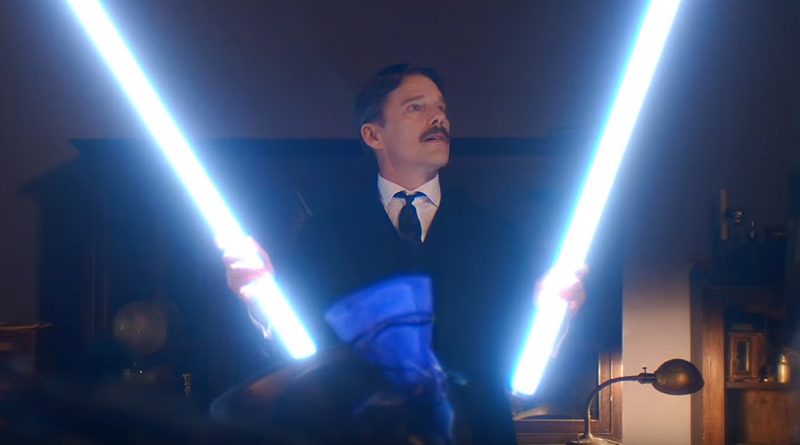 This film biography begins with a man stroking a cat’s back, producing a spark. The petting also produces a question from the man: “Is nature a gigantic cat, and, if so, who scratches its back?” The questioner is Nikola Tesla, an inventor finally getting credit and, that, courtesy of a car bearing his name.

Tesla may be one of the most unheralded inventors to have played with electricity (unless you count two recent films about him). A Serbian-American, he was born in 1856 in Croatia and died in 1943. He was an electrical engineer known for inventing a motor using alternating current to supply electricity. His rival, Thomas Edison, however, believed that AC was a waste of time, especially compared to DC, his baby.

As director, Michael Almereyda, played with light, of course, given the subject matter of the film. Light on each face — whether sun or bulb or fire — adds interest when the dialogue cramps. As writer, Almereyda, lectures on coils and currents — causing the occasional nap.

Tesla, the film, does not start at crib and end in coffin. That’s a good thing but not always easy to follow. Instead of being on a double-bill with Alejandro Gomez-Rejon’s The Current War, which addressed the Tesla/Edison/Westinghouse triangle last year, Tesla should be shown with Marjane Satrapi’s imaginative Radioactive, which also plays with time and interstitial information.

Tesla is streaming on IFC.