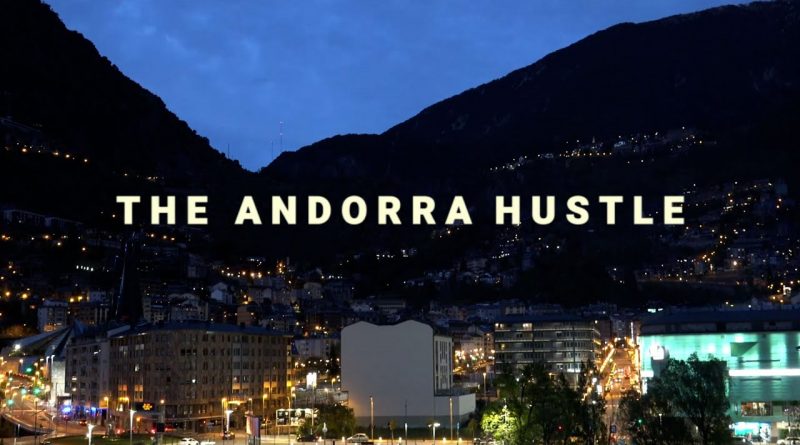 If any doubt lingers about the international corruption of banking and the vindictive behavior of countries advancing their own political agendas, writer/director Eric Merola’s documentary The Andorra Hustle will dispel any reservations in an exceedingly complicated exposition. The long-standing Catalan conflict with Spain became the catalyst for surreptitious, nefarious manipulations of a financial nature and false charges of money laundering.

Andorra, that small country sandwiched between Spain and France, became a pawn in the power struggle, the target and tool an Andorran bank that goes by the initials BPA for Banca Privada d’Andorra. As this nearly two hour analysis proceeds, twists and turns become so enmeshed in global politics and legal complications that it’s helpful to keep in mind opening titles stating: “A bank was assassinated by Spanish, American, and Andorran governments while trying to destroy the Catalonian Independence Movement. This is how and why it happened.” Or as agreed in the documentary’s conclusion, this was a very clever bank robbery.

To explain the bewildering context, Merola gives geographical and historical background, definitions of offshore banking and the involvement of Section 311 of the US Patriot Act. Add to that the newly and calculatingly established U.S. Treasury’s Financial Crimes Enforcement Network (FinCEN), the Agency for the Resolution of Banking Entities (AREB), and in 2015 Vall Banc, S.A.. It would receive BPA assets once its accounts were frozen. Eventually, American private equity firm J.C. Flowers & Co. would acquire all that at an 86% discount. The serpentine developments soon expose the actual objective: to destroy the Catalan movement via lawfare, a portmanteau of law and warfare defined as “a form of war consisting of the use of the legal system against an enemy.”

The film stitches together animation, charts, archival footage, and a litany of interviews with lawyers, CEOs, bank directors, accountants, and victims maliciously smeared in the press, their deposits gone. Frankly, it’s too much to absorb with background music pumping up the drama and an edit every few seconds, never allowing calm synthesis of facts. Nevertheless, Merola’s whirlwind tour is a distressing, overwhelming exposé. The entire criminal scheme begs for further investigation and publicity. Primarily in English with subtitles as needed. The Andorra Hustle is available on Amazon Prime September 4.