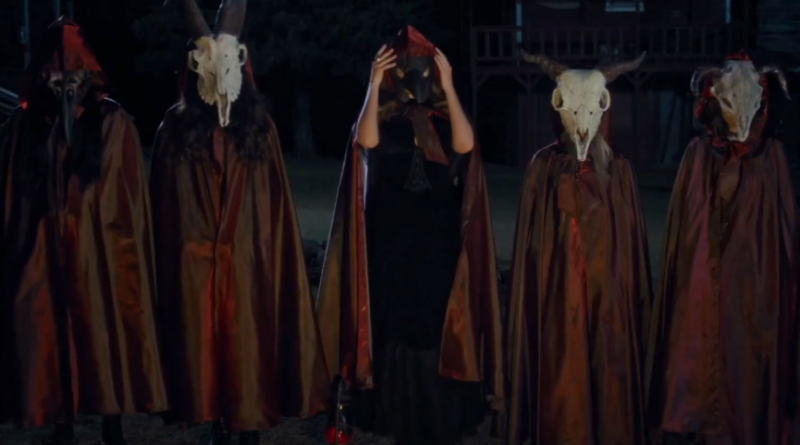 After a botched train robbery, this horror/Western finds the legendary Dalton gang taking shelter in a mysterious ghost town where nothing is as it seems at first glance.

It’s prefaced by an ominous Edgar Allen Poe quote: “And travelers now within that valley, through the red-litten windows, see vast forms that move fantastically to a discordant melody; while, like a rapid ghastly river, though the pale door, a hideous throng rush out forever, and laugh – but smile no more.”

What the Daltons heist from the train is a locked trunk which, when they pry it open, contains a young woman named Pearl (Natasha Basset), her arms locked in shackles. She offers not only a hefty reward but also medical help for Duncan Dalton (Zachary Knighton), their wounded leader, if they’ll take her home to the tiny town of Potemkin.

While young Jake Dalton (Devin Druid) is obviously quite attracted to Pearl, mysterious Maria (Melora Walters) explains that, many years earlier, the women of Potemkin took her in on the day Pearl was born. That leads to a flashback that culminates with her being burned at the stake as a witch by legendary Cotton Mather (James Landry Hebert).

In the meantime, members of the Dalton gang (Noah Segan, Stan Shaw, Bill Sage, Pat Healy, Tina Parker) are being ‘entertained’ at the local brothel by a bevy of eager-to-please prostitutes.

As it turns out, they’re a creepy coven of witches who covet Jake because his virginal blood contains the supernatural restorative powers they crave.

Inanely and ineptly scripted by Cameron Burns, Roman Dent and director Aaron B. Koontz, it’s a muddled mess, containing one line of dialogue that mirrors my reaction perfectly, when a gang member mutters: “I’ve had enough of this strange shit.”

On the Granger Movie Gauge of 1 to 10, The Pale Door is a flawed, flimsy 4. Available on Prime Video, Fandango and Vudu – but don’t bother.