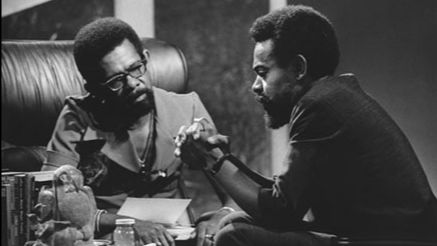 “This is one of the highlights of my life to be on this sort of Black television program before a Black audience, because this is the first experience that I have had.” This comment came from noted African American writer Chester Himes (A Rage in Harlem, Cotton Comes to Harlem), who, along with the vocal group The Dells, was a featured guest on a 1972 episode of a truly singular TV series called Soul! From 1968 through 1973, public television station WNET in New York produced the weekly one-hour talk and variety show that was wholly dedicated to the African American experience.

The producer of the show, Ellis Haizlip, a Howard University-educated impresario in the Black arts scene in New York was the perfect person to elevate the presence of African Americans on TV. He plumbed his contacts and his unerring radar for budding talents to present performances by the Alvin Ailey Dancers, readings of poetry and prose by the likes of Nikki Giovanni and Toni Morrison, discussions with political activists like Stokely Carmichael and controversial religious leaders like Louis Farrakhan, and musical performances by Stevie Wonder, Ashford and Simpson, Rahsaan Roland Kirk and many, many others.

Melissa Haizlip, the codirector/writer of Mr. Soul! and Haizlip’s niece, has assembled a dizzying array of personal photos, clips from Soul!, talking-head interviews with some of the guests who appeared on the show and those who were inspired by it, as well as archival footage of the roiling times during which Soul! aired and Haizlip’s own words delivered in voiceover by actor Blair Underwood. This approach helps viewers get acquainted with Haizlip and his history, but also locates him and his work within the societal attitudes that made Soul! possible and the darkening national landscape under President Richard Nixon that spelled the show’s doom.

As Mr. Soul! highlights, there may never have been another show of any kind that was as great for poetry as Soul! was, including bucking the censors by booking Last Poets to perform their works. These performances make clear the generations-long continuum of poetic expression that has sustained the Black community and from which rap arose. Haizlip also was enamored of dance, and Mr. Soul! includes a beautifully performed and ingeniously photographed pas de deux that was a highlight of the film.

I knew nothing about Soul! or the estimable Ellis Haizlip before watching this documentary. I am so happy to have been introduced to both, and I hope that one day soon a show as intelligent, exciting, and unapologetic as Soul! was will return to the airwaves.

EDITOR’S NOTE: You may also be interested in Melissa Haizlip on MR SOUL! and Ellis Haizlip’s Mega Legacy – Jennifer Merin interviews, on AWFJ.org and on YouTube