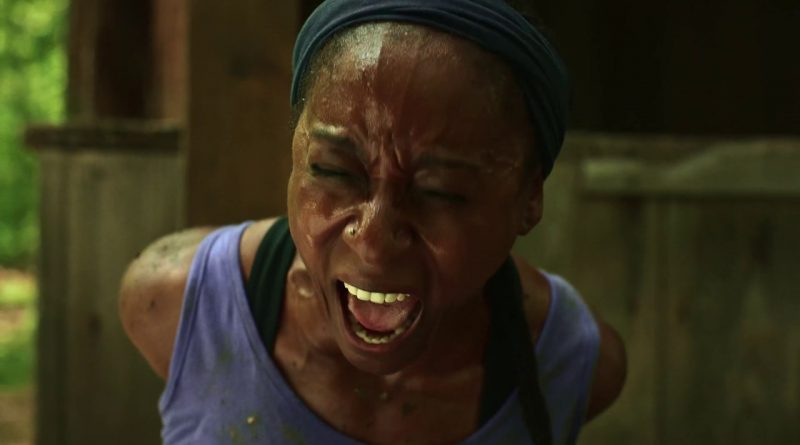 What doesn’t kill you makes you stronger.

That’s just one of the many creaky cliches Range Runner triggers as it runs its all too predictable course.

This survival thriller benefits from strong performances — and the haunting contrast between its sylvan setting and sinister action.

Unfortunately, those attributes can’t offset the illogical decisions that lead the movie’s protagonist into danger.

Granted, if she didn’t do such stupid things there wouldn’t be any movie, but the movie still has to convince us the character would make those stupid decisions in the first place.

And while Celeste M. Cooper (Chicago P.D.) is always compelling and almost always convincing as Range Runner’s fierce central character, Mel, she can’t quite convince us she’d do all the things she does that get her into trouble. Big trouble.

We first meet Mel’s younger incarnation (Mariah Sydnei Gordon) on a high school track, struggling to meet the outsize expectations of her martinet father (Carl Clemons-Hopkins). Stopwatch in his hand, scowl on his face, he lectures his beleaguered daughter on this “teachable moment,” telling her “all the pain and heartache in the years to come, this is when we first learn to cope.”

Our next sight of Mel finds her fully grown, radiating don’t-mess-with-me determination as she runs down a tree-dappled wilderness trail.

She’s on her own personal odyssey, running hundreds of miles from point to point between support stops.

When she runs past a clearly hapless hiker (Michael B. Woods) with bloodied feet, she stops to help him bandage his broken blisters. When his buddy (Sean Patrick Leonard) lumbers into view, Mel notices the guy’s arm is bleeding — with what looks suspiciously like a gunshot wound.

All together now: No good deed goes unpunished.

That’s precisely what Mel discovers as these desperate characters bedevil her in a cat-and-mouse chase deep in the woods.

At least those sequences help explain why Mel’s pursuing such an arduous quest. Her cardboard adversaries, alas, have no such depth.

As a result, it’s up to the intense yet sensitive Cooper to keep us engrossed in her grueling ordeal. She’s up to the task — even when the rest of Range Runner isn’t.