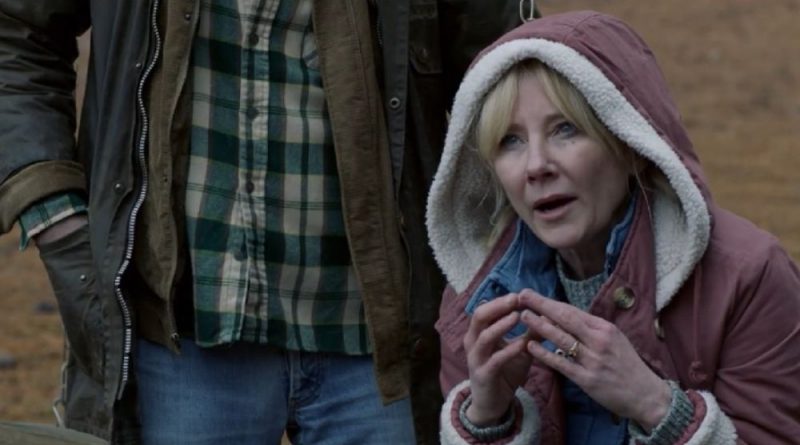 Opening with an Emily Dickinson poem about loss and grief, writer/director/actor Peter Facinelli has created a dark psychological thriller, pivoting around a missing child.

Set in the woods, not far from Tuscaloosa, Alabama, the convoluted plot revolves around Wendy (Anne Heche) and Paul (Thomas Jane) Michaelson, who are first seen in their RV with their 10 year-old daughter, Taylor (twins Kk and Sadie Heim), and dog Lucky in the back seat.

As they indulge in happy road-trip sing-alongs, Paul maneuvers their mobile home onto the lakeside campground where they plan to spend Thanksgiving vacation.

Nevertheless, they settle in, parked next to a camper that’s occupied by flirtatious, bikini-clad Miranda (Aleksai Archer) and her husband, Eric (Kristopher Wente). Soon after, Taylor mysteriously disappears – without a trace.

Arriving on the scene, Sheriff Baker (Jason Patric) and his deputy Rakes (Peter Facinelli) share ominous news that an armed and dangerous convict has escaped from a nearby prison, although they doubt that he’d kidnap a child.

Despite being told not to join in law enforcement’s search, traumatized Wendy and Paul are determined to help find their daughter – which leads to one agonized complication after another, particularly when Miranda and Eric join them.

In interviews, Peter Facinelli revealed he was inspired by a real-life incident when he went to an RV park and realized there was a prison nearby. Given the inherent melodrama and Heche’s hysterics, it certainly seems far more suitable for the small-screen then the big-screen.

On the Granger Movie Gauge of 1 to 10, The Vanished is a sinister, suspenseful 6 – available on VOD.