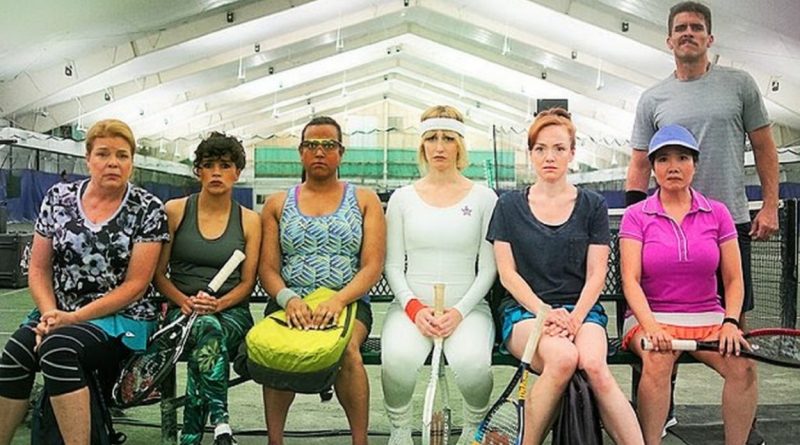 First One In is an underdog story set on and off the tennis court.

It all begins when Madi (Kat Foster) gets tossed from “Survivor-like reality show not because of votes against her, but because she smushed an endangered animal, thinking it was a giant spider. Suddenly she’s the country’s most hated woman; she’s got protesters outside of her house and she loses her job as a real estate agent. Jeered wherever she goes, she changes her appearance and, under a fake name, applies for a position at a real estate agency owned and run by the terrifying Bobbi (Georgia King). Bobbi, who’s a combination of a queen bee, a mean girl, and Gordon Gekko from Wall Street, is tennis-obsessed and as ruthless on the court as she is in business. Madi can have the job, she says — if she proves her mettle in a game of doubles.

A former player with more than a few years between her and the court, Madi goes to her old club and joins an instructional clinic with four other women; the extra coaching snags her the win and the job. She sticks with the clinic, and, eventually joined with Madi’s old partner Ollie (Alana O’Brien), the group becomes a team and goes up against Bobbi and her team in an annual tournament.

In many ways First Ones In is a typical “ragtag band of misfits competes against threatening powerhouse” story, but there’s a reason there are so many of those movies — those stories work. Moreover, O’Brien’s choice to set the rivalry at an amateur level means that the matches seem more accessible and less intimidating than if the characters were at a more elite skill level; even though the matches proceed at a slower pace, they’re still enjoyable to watch (though some of the actors probably could have done with a bit more on-court instruction before filming began). It’s particularly wonderful to see the variety of ages, races, and body types that are on Madi’s team; Bobbi’s, of course, is largely made up of white, blond, thin clones of their dear leader.

Writer and director Gina O’Brien created an engaging script full of enjoyable snipes and zingers, most of which belong to Bobbi. Her script and direction keep the pace brisk, never bogging down into overlong or superfluous story elements. While she overwrites Bobbi’s character, what saves the character from tipping from the merely unbelievable to the ludicrous is King’s performance; she commits to the awfulness with such gusto that much can be forgiven. Foster nicely conveys Madi’s journey from utter despair into a renewed confidence. The minor characters, particularly the women in the tennis clinic, are particularly well-written; each one is well-developed and well-acted.

Movies about women’s sports — particularly team sports — often get short shrift when compared to men’s sports movies; it seems that for every A League of Their Own there are a dozen Friday Night Lights, and that’s one of the things that sets First One In apart. But in the end, it’s O’Brien’s ensemble of characters and the actors who play them that makes First One In a good game to watch.