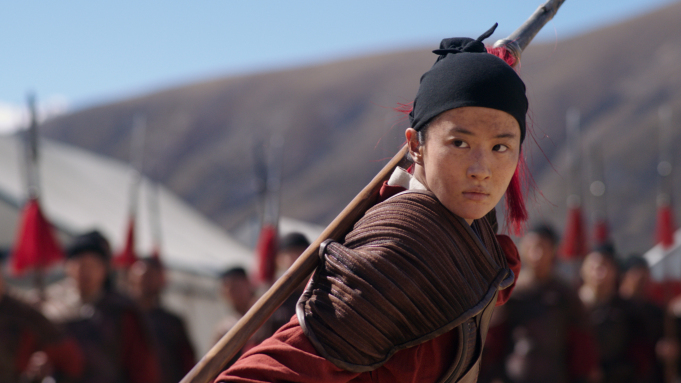 Director Niki Caro’s live-action remake of Disney’s beloved 1998 animated Mulan is by far the most ambitious and rewarding of the studio’s recent remakes, including last year’s Aladdin and The Lion King. It remains faithful to the story, with its ancient origins, while giving it a modernity and a relevance that injects it with new life. It’s an old-fashioned battle epic with a solid female empowerment core.

Caro, whose Whale Rider and North Country were memorable for strong women’s roles, heads an ace team that includes costume designer Bina Daigeler, production designer Grant Major and cinematographer Mandy Walker. The production visuals are first-rate from the moment the story opens onto the village in China where Mulan (played as a child by Crystal Rao) is practicing sword maneuvers with her father (Tzi Ma, last seen as the dad in The Farewell.) Mulan is a spirited child who can dash across the colorful rooftops of her village as she chases down a chicken to the disapproval of the neighbors. As Mulan, played as a young woman by Yifei Liu, matures into a regal but no less rebellious young woman, the stakes are higher. She is supposed to bring honor upon her family by making a good marriage. Even her beloved father who admires her fighting spirit admonishes her to know her place.

One of the film’s secret weapons is that villain Bori Khan’s lieutenant, the warrior-sorceress Xianniang, is played Chinese screen legend Gong Li. She masterly brings to this mysterious shape-shifter a power that’s both chilling and, in a pivotal scene, gut-wrenching. Female warriors are decried as witches in this man’s world. Xianniang crossed to the dark side but Mulan has a choice: her father’s battle-tested sword bears the words “Loyal, Brave and True.” It’s the credo that follows her as she steals away in the night and joins the imperial army to defend the emperor against the evil Bori Khan (Jason Scott Lee).

With her long, dark hair wrapped into a bun, Mulan passes herself off as a young man named Hua Jun as she trains for battle with an army of other young men. Like the gender-wise classic Yentl, the film depicts a heroine who tries to blend in but is too gifted not to stand out. There’s some comedy about Mulan undressing in secret and struggling to shieldvher true identity from the handsome, inquisitive Honghui (Yoson An). When, in an act of defiance and pride, Mulan literally lets her hair down and fights as a girl, the film is an irresistible empowerment tale set in the past but with its heart firmly in the present.

The elaborately choreographed battles between the forces of good and evil, though impressive, are in some ways the least interesting part of the movie, right down to the predictable showdown between Mulan and Bori Khan. Still, the gravity defying aerial and acrobatic effects that recall Crouching Tiger, Hidden Dragon are a visual treat. Soldiers run up and down the walls of the palace, shoot arrows from galloping horses and spin through the air as they sword fight. This Mulan may have been made for the big screen, but it is impressive anywhere.