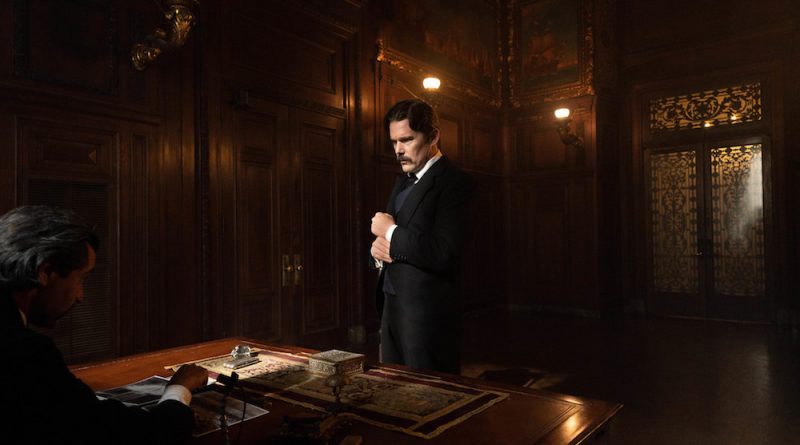 If ever a movie genre could stand a few jolts of innovation and electricity, it’s the biopic, a cinematic form often rendered inert by historical weight, period trappings and stodgily straightforward storytelling.

Fittingly, writer-director Michael Almereyda tries to channel some much-needed energy into the formulaic film format with “Tesla,” his revisionist biography of enigmatic genius, inventor and electrical engineer Nikola Tesla. But the resulting film, while sometimes strikingly flashy, isn’t as invigorating as audiences would hope.

Four-time Oscar nominee Ethan Hawke, who starred in Almereyda’s cinematic Shakespeare adaptations “Hamlet” and “Cymbeline,” reunites with the auteur to play Tesla, a brilliant futurist whose designs for alternating current changed the electrical grid as we know it but who also devised many other far-sighted ideas that unfortunately never became reality.
Hawke thoroughly buries his natural charisma to portray Telsa as a dour, humorless stoic, whose world-changing ambitions contrast with his disinterest in monetary gain and whose inability to make meaningful personal connections doesn’t make him less of a humanist. Compared to the quietly crackling power the late David Bowie brought to his Telsa portrayal in the 2006 film “The Prestige,” Hawke’s Tesla is so often so listless that it’s easy to imagine zapping him with a few volts just to get some juices flowing.

Eve Hewson supplies a coolly compelling energy as Morgan’s daughter Anne, Telsa’s friend and would-be love interest who serves as Almereyda’s nontraditional, often anachronistic narrator. That means Hewson sometimes appears in a sort of sleekly modern studio space comparing Google search results between Telsa and his rivals on a MacBook or interrupts the narrative to assure us that Telsa and Edison didn’t really have an argument that culminated with an ice cream cone duel.

By the time Hawke’s Tesla sings an gravelly karaoke rendition of Tears for Fears’ “Everybody Wants to Rule the World,” it’s clear that Almereyda’s biopic bears a definite resemblance to a Tesla coil: It’s got some sparklingly, memorable style but the dazzling brightness fades fast.