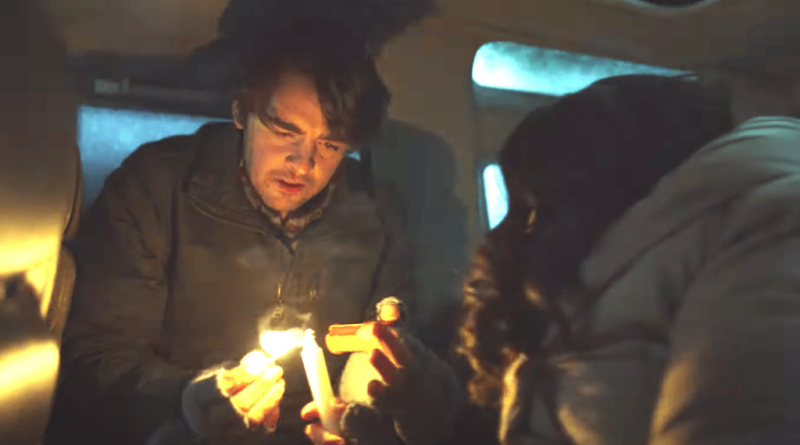 The incredible survivalist drama Centigrade gave me chills and kept me on the edge of my seat.

Naomi (Rodriguez) is an American author and has been invited on a book tour for her latest novel. Sounds like a nice little escape, right?

Not really. They get caught in a horrific snowstorm and decide to pull over. Then they fall asleep and wake up trapped and buried underneath tons of snow and ice.

Who falls asleep during a snowstorm?

As if that weren’t dramatic enough, did I mention that Naomi is eight months pregnant? You would think she would have postponed this book tour.

Naomi and Matt don’t have much food on hand or nearly enough clothes or blankets to keep them warm for the duration they’ll be snowed under. It’s not an overnight thing either.

Despite their grim ordeal, initially Matt seems calm and collected and MacGyver-like smart enough to find a way to get them out safe and sound.

But as the hours keep ticking away, their lovey-dovey marriage becomes tested. All the comforting words they had for each other earlier have given way to plenty of bickering and arguing.

Naomi wants to break the car window to try and get out, and walk for help, but Matt insists on waiting for someone to rescue them. It doesn’t happen. Surviving this will require some extreme and disturbing measures.

Centigrade is a solid containment thriller. It does an excellent job wearing on your emotions and makes you wonder how you would respond if ever in a similar situation.

Norway is still on by bucket list, but believe me, after seeing Centigrade I won’t be visiting during the winter.

EDITOR’S NOTE: You can view the video of Tara McNamara’s interview with Genesis Rodriguez on AWFJ’s YouTube channel. Or read the transcript of the interview on AWFJ.org.