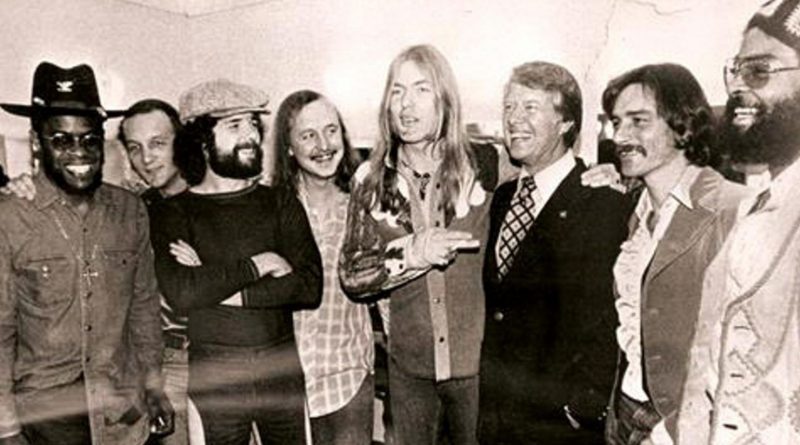 What a time capsule Jimmy Carter: Rock & Roll President delivers — by simply existing. What a stark contrast to the current US administration, too. The release in 2020 of a documentary celebrating an inclusive American president’s embrace of popular and even alternative music, and of the music industry’s embrace of him in return, instantly and glaringly sits in opposition to the nation’s present-day leadership. Rarely a week goes by at the moment without news reports of the country’s head falling afoul of big entertainment names by using songs without permission at rallies and events, with Neil Young, REM, Twisted Sister, Adele, Elton John, the Rolling Stones, Queen, Steven Tyler, Rihanna, Pharrell Williams, Guns N’ Roses, and the estates of George Harrison, Prince, Tom Petty and Leonard Cohen among the aggrieved. Before viewers even watch a frame of Jimmy Carter: Rock & Roll President, it’s easy to glean that its subject — a Georgia-born and -raised peanut farmer, Democrat head of state and Nobel Peace Prize winner — didn’t have the same troubles.

Of course, knowing that Carter wouldn’t have played someone’s music for political purposes without authorization and seeing him as the titular term aren’t the same thing; the job of Mary Wharton’s (Joan Baez: How Sweet the Sound) detailed, warm and absorbing documentary is to make that case, and make it the film does. It’s an easy task, as well as an entertaining one in the veteran filmmaker’s hands. She has ample help, including from a 95-year-old Carter himself. In friendly, thoughtful and candid chats filmed in his Plains home — in the same small town he was born in and still lives now — he shares his fondness for gospel music, his respect of jazz, and his love of Bob Dylan, Willie Nelson and The Allman Brothers. Also fueling the feature: his memories of his childhood, political career and the friendships forged with the aforementioned performers that have lasted decades.

One such early recollection involves Nelson, his assertion in his autobiography that he once smoked pot at the White House during Carter’s time in office, and he latter’s admission that the person Nelson toked with wasn’t a staff member, but one of his sons. Not every anecdote proves as juicy and amusing, but they’re usually just as revealing in their own way — whether Dylan is noting that, when they first met, Carter quoted his lyrics back to him, or the president is recalling how June Carter Cash would say she was his cousin. Greg Allman talks about camaraderie and scotch, Jimmy Buffet about the weight his support helped add to Carter’s campaign when it was struggling, and the likes of Nile Rogers and Bono are effusive in their praise. Joining the chorus of commentary are Chip Carter, the president’s son, as well as colleagues recognizable and less so, including Madeleine Albright.

Wharton has ample footage to draw upon, for editor Mari Keiko Gonzalez (The Music Never Ends) to weave together and for music supervisor Chris Robertson (The Jesus Rolls) to drop needles to — that’s one of the benefits of making a movie about a late 20th-century president. And those again star-studded materials, from clips of the inaugural gala attended by John Lennon and Yoko Ono, to glimpses of White House concerts with Dexter Gordon, Dizzy Gillespie, Herbie Hancock, Ron Carter and George Benson, also rightly rank among the Jimmy Carter: Rock & Roll President’s highlights. Indeed, they’re missed when the film begins to spend more time eulogizing the end of Carter’s one-term stint as commander-in-chief, an expected element of the documentary but one that never feels as vital as everything prior.

Recognizing the impact Carter would’ve had if he hadn’t lost to Ronald Reagan is understandable. Celebrating his post-presidency achievements falls into that category, too. But the equally zippy and affable Jimmy Carter: Rock & Roll President so convincingly explores what made Carter stand out by following the music that everything afterwards feels somewhat superfluous. Evident in the footage and photos of him with a who’s who of ‘70s and ‘80s talent, in their still-supportive words and in his own chats to camera, is a distillation of the values that made both Carter and everyone from Nelson to Dylan sing the same song. Wharton spells them out early anyway in the obligatory historical overview that delves into his upbringing, and reinforces the same ideas when touching upon the Camp David Accords, Panama Canal Treaties and Iran hostage crisis, all of which are important to note. But when Jimmy Carter: Rock & Roll President realizes that there’s nothing like seeing Carter’s love of music and all it represented in action — and the music world’s equally symbolic love back — it croons a tune that lingers; the current administration couldn’t play it even if it pilfered it.