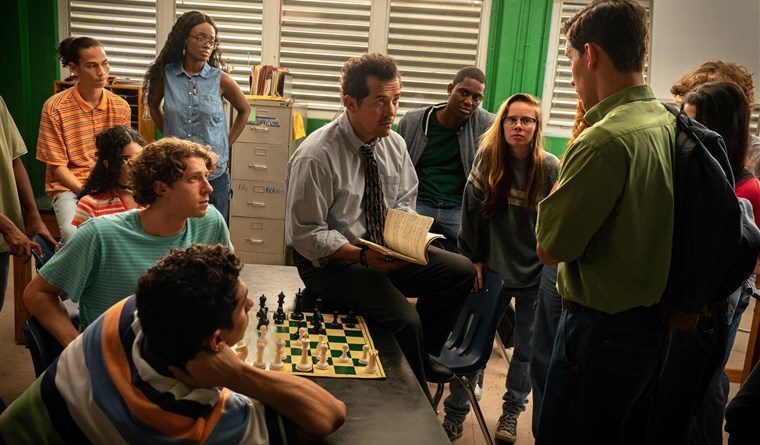 At a time when the demands for equality and protection for people of color around the country are landing like a silent scream to the administration currently in charge, any message of hope and positivity is welcome. This is especially true while so many kids are trapped at home during a pandemic, regardless of means or educational access. Enter the narrative feature Critical Thinking, starring and directed by John Leguizamo. It is an inspiring retelling of the true-life story of chess coach Mr. T. Martinez (Leguizamo), who brought his “Critical Thinking” class, which used chess to expand critical thinking, but also as a way to develop self esteem and bring empowering to at-risk kids in underserved communities in his school district. Combining his passion for teaching with the brains and determination of the kids in his class led them to the National Chess Championship.

When discussing his commitment to making Critical Thinking, Leguizamo has spoken about growing up feeling like an outsider, seeing movies and reading books where there was no one who looked like him. Latinx representation in pop culture was nearly always negative or stereotypical. He also remembered the misinformation the controversial (and racist) book The Bell Curve spread about the intellectual inferiority of black and brown folks, and the damage it caused, both inside and outside communities of color. With all that as his experience, it’s no wonder he was drawn to this story, which is just one great example of the dedication and intellectual prowess present in even the most underprivileged environments. Tools and support are all that’s needed for them to excel.

Executive Producer Carla Berkowitz spent 20 years getting the film to the screen, and at every turn you can tell it is a labor of love. Beyond Leguizamo’s sharp-as-a-tack acting skills, the cast of performers, all of whom represent players in the real story, are sympathetic and compelling to watch. With Leguizamo at the helm, the actors got lots of practice with chess games, creating a sort of real chess team with the help of their real-life counterparts as coaches. Even as a white girl film critic, I gloried in seeing so many black and brown co-stars performing in such a positive story of success, so I can imagine all the kids out there who would appreciate seeing themselves finally reflected in film, and further would find exciting the idea of learning and excelling in a game often thought of as exclusive to the wealthy and privileged.

There are, however, examples from around the world of teaching chess to successfully change lives, bring self esteem and hone analytical skills of kids in underserved communities. One example, ‘Chess in the Schools’, is a program in New York City that has taught over 500,000 of the city’s most underserved children, inspiring them to created bigger personal goals and higher academic achievement. Another, which was the basis for the award-winning 2014 film The Dark Horse, is Maori speed-chess champion Genesis Potini, who taught local youth in the poorest district in Gisborne to play the game in an attempt to keep them from getting involved in crime. Maurice Ashley, the first black person in history to achieve the game’s highest title, partnered with ‘The Chess Club and Scholastic Center in St. Louis’ to provide every elementary and middle school in the Ferguson-Florissant School Distract a 10-week chess club for its students after school, to help support and uplift the community after the death of Michael Brown and the civil unrest that followed.

There is also a long and storied history of Latinx chess players, especially those from Cuba, where the game has been played since being brought to the country in the 16th century. Currently, chess is taught in over 9,000 elementary schools and 1,000 high schools in Cuba. Leguizamo’s movie brings the truth of this roaring back in concrete fashion.

The joy and pride that permeates the story of intellectual heroism in Critical Thinking is like a healing salve, however temporary, to the bleakness of our news cycle. With a release this close to an election, the title alone is like a call to action to use our brains, in as many ways and as creatively as possible, to level the playing field for all, now, and into a better 2021. That we can be inspired by a teacher and kids who beat the odds of a system that has been built to deny them, is all the reason we need to celebrate the film.