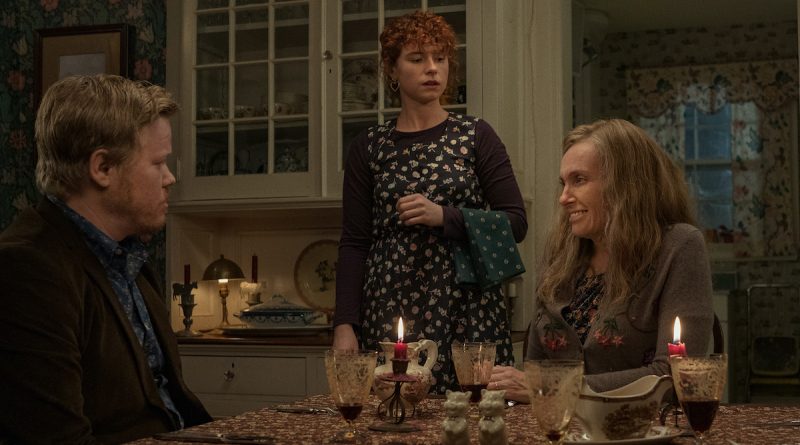 I’m Thinking of Ending Things is another Charlie Kaufman adventure

For anyone ready to abandon logical narratives, coherent dialogue, and the laws of physics, there’s an alternative. Director Charlie Kaufman’s I’m Thinking of Ending Things bears little resemblance to conventional cinema or reality as ordinarily presented. In fact, so convoluted are the film’s flights of fancy in incongruous scenes that no one, including Kaufman, could answer star Jesse Plemons’ question.

According to the September 6 New York Times feature on Plemons, as he and other actors puzzled over the story, Plemons asked, “Can you tell us what this is about?” Kaufman replied, “You know, I don’t know.” I can report only the basic elements. Adapted from Iain Reid’s 2016 novel, a newly romantic couple, Lucy and Jake drive through a raging snowstorm to have dinner with Jake’s parents on their isolated farm. The delightfully wacky dinner scene serves up supremely surreal humor that surpasses any definition of normality. Credit to, Toni Collette and David Thewlis who, as Jake’s parents, give inspired performances to unhinged characters who shape shift through time warps.

Occasional interruptions to the dinner signal the illogical events to come as Lucy keeps insisting that she has to get back to her apartment that night. She and Jake do begin that return trip, the snowstorm continuing to rage. Along the way, topics range from Oscar Wilde to David Foster Wallace, a debate over the sexism or lack thereof of the song Baby It’s Cold Outside, Lucy reciting perfectly a Pauline Kael film review of A Woman Under the Influence, without any attribution, plus a lovely ballet in a high school’s hallways and songs from Oklahoma. If all this sounds disjointed, to push the dislocations further, Jake and Lucy stop for ice cream in the middle of nowhere. Jessie Buckley and Jesse Plemons embody their daft but serious characters, alternately stuck and unstuck in time, rather like Vonnegut’s Billy Pilgrim.

Kaufman’s previous films—Being John Malkovich, Eternal Sunshine of the Spotless Mind, and Anomalisa—prepare viewers for this dive down the rabbit hole of memory and joyful exploration of disconnected sequences. Figuring out how the pieces fit is a pointless endeavor. The only way to weave happily through this two and a quarter hour fantasy is to surrender to the tantalizing, playful, disjointed interactions and embrace the wildly unusual joy of letting go of reason and judgment.

I’m Thinking of Ending Things is available on Netflix.