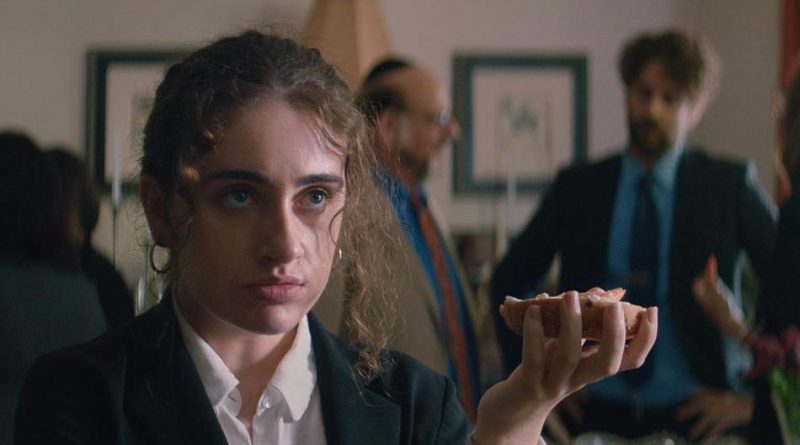 The feature film debut of Emma Seligman is something very special indeed, somehow tonally both very new and very old at the same time. At its core, it is driven by a style of Jewish comedy that is instantly recognisable and familiar, in cinematic terms echoing the fast-paced dialogue of Elaine May in film’s such as A New Leaf and The Heartbreak Kid. But make no mistake, this is no retro throwback; in Shiva Baby, Seligman paints a distinctly contemporary portrait of a young woman whose carefully constructed false identity is about to come crashing down, forcing both herself, her peers and we, the audience, to address the damage the social fetishization of professional success can do to young people who just need time to figure things out on their own.

A highlight of the Next Wave programme at the 2020 Toronto International Film Festival, New York-based Canadian filmmaker Emma Seligman made the short film version of Shiva Baby while she was studying at the film school at New York University. That film would begin Seligman’s festival journey, premiering at South by Southwest in 2018, with this feature expansion of the project also travelling internationally.

The film centers on Danielle (Rachel Sennot), who can’t get a handle on the direction of her studies, tied so strongly as they are to the enormous pressure and expectations forced on her by her well-meaning parents. As the title indicates, the reality of Danielle’s hidden life starts rising to the surface at a particularly uncomfortable shiva that she attends to placate her parents when her lover/sugar daddy Max (Danny Defarrari) turns up. Shocked at first that Max used to work for her father, things only get worse for Danielle when Max’s wife and baby appear, and all the lies she told Max about her successes in life are casually revealed to be untrue in boisterous conversation with her parents. Add to the mix the appearance of her far more successful ex-girlfriend Maya (Molly Gordon), and Danielle is about to have a very bad day indeed.

Shiva Baby is a deeply funny and profoundly awkward comedy about a young, insecure woman experiencing almost unbearable social pressure. The tension builds confidently, driven as much by the cacophony of non-stop gossiping voices and dramatic strings as it does Seligman’s razor-sharp screenplay and Sennot’s perfect performance of the overwhelmed and increasingly exhausted Danielle. As simple in its set-up as it is complex in its interpersonal dynamics and the execution of its masterclass-level comedy, with her debut feature it is clear that for Seligman this is just the beginning of a promising filmmaking career.