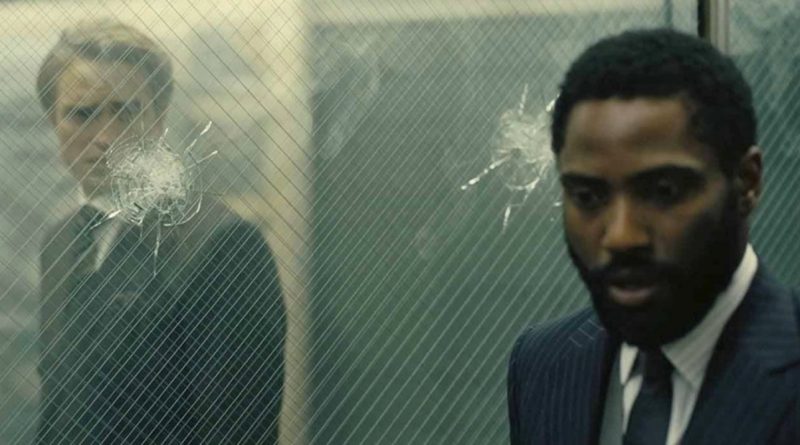 Fans of writer/director Christopher Nolan are not strangers to bent time, trippy constructs in physics, or highbrow filmmaking. Being a fan myself, I’ve loved all the elements we’ve grown to expect and enjoy in Nolan movies, beginning with Momento, and reaching its zenith with Interstellar. His new release Tenet has all those, and for a film that, as always with Nolan, uses practical effects and performers in real locations instead of blue screens, it is a technical and visual marvel. Unfortunately, all that wizardry can’t make up for the lack of character development and mental gymnastics required to buy into and stick with the story.

The word tenet is a palindrome, which is a clue I won’t elaborate on about the plot, but suffice to say there is a circularity to it, that fascinates a little and confounds a lot. The story involves a CIA agent (John David Washington) only ever referred to as “The Protagonist”, who finds himself working in a top secret organization called Tenet, and their whole raison d’être is to save the world from annihilation. The world apocalypse might come from a Russian oligarch with a galloping case of malignant narcissism and megalomania named Andrei Sator (Kenneth Branagh) who has discovered a dangerous way to mess with time. The Protagonist gets help from English operative Neil (Robert Pattinson) and finds entanglements in Kat (Elizabeth Debicki), Sator’s emotionally damaged wife. There are several other players in the story that allow memorable but fleeting supporting performances by Clémence Poésy, Michael Caine, and Aaron Taylor-Johnson.

It is in the performances and jaw-dropping real effects-laden set pieces that Tenet most succeeds. Though there are no characters that reveal any true depth, Washington proves he is more than able as a lead, dancing back and forth between the necessary bravado and struggles of conscience that connect audiences with The Protagonist. The irony that a Black man stars in a film where nearly everyone else is both named and white should not escape viewers. The easy way Pattinson and Washington interact opportune rare moments of humor, but it is the two of them together onscreen that will, in part, keep your interest. Debicki has great presence as the emotional anchor of the film, but that aspect of the story, though central, seems superfluous. Surely Nolan could have found a better representation of humanity than he offers with her part of the plot.

The action sequences are a thing of glory, as should be expected with a Nolan film, but these outdo even his most ambitious work to date. To explain what makes them so fascinating and impressive would be to give away plot points, so I’ll just say if you commit to seeing the movie, those scenes will be your payoff. Note, however, that they must be seen on a very large screen to do them justice.

What fails in Tenet is the lack of any real stakes. Even for a film that is centered on the potential end of everything, including mankind and all that has ever existed, it’s still unlikely viewers will feel attached or connected to what The Protagonist and his crew are up against. The reason and the method of said apocalypse are both so esoteric, so theoretical that they almost exist in another universe. We want to care, we just don’t. We’re all too busy being confused or working to keep up with the plot twists folding in on themselves, not unlike the buildings in Inception. Also, there’s the problem of the villain. We don’t care about him, either.

I’m sure there are plenty of bearded redheads that are real-life super villains. After all, history believed us to be witches marked by the devil. In Eastern Europe, redheaded babies were often killed at birth. That being said, Kenneth Branagh as billionaire Russian arms dealer and enthusiastic wife beater Andrei Sator is the worst possible casting gaffe. Given one of the most famous acting techniques was invented by Stanislavski, a RUSSIAN, are there really no Russian actors who could have played this role? I have seen great performances by Branagh, but this is not one of them. Even his withering glares, stage-whispered threats, and the pervasive ennui with which he infuses his character don’t add up to someone many will believe could hold the fate of the world in his hands.

This year has been quite a trial for Nolan, I’m sure. The release of Tenet has been delayed repeatedly, and no doubt he loves this film as much as he does all his releases. Like so many suffering from the economic devastation the pandemic has brought, he doesn’t deserve for his film, his art, to be released with a whimper. At least, though, it’s this film that’s taking a hit, and not Inception or Interstellar, which are both masterworks. Nolan ‘stans’, go if you must, and enjoy Tenet for what it is, and look to John David Washington’s next starring role, where he’ll truly shine.