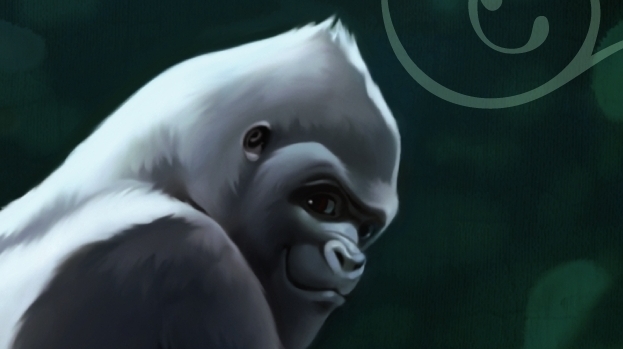 If you subscribe to Disney+, you have access to this heartwarming, live-action/CGI adventure that’s about friendship, freedom and the power of visualization.

Ivan (voiced by Sam Rockwell) is a soulful, 400-pound silverback gorilla who lives in a cage as part of a tiny circus in a suburban shopping mall. He shares a communal habitat with Stella (voiced by Angelina Jolie), an aging elephant, and the brusque dog Bob (voiced by Danny DeVito).

Ivan’s best-friend is young Julia (Ariana Greenblatt), daughter of mall employee George (Ramon Rodriguez). When Julia shares some of her broken crayons with Ivan, they discover that Ivan loves to draw and paint – acclaimed as “a primate Picasso.”

Much to the chagrin of Ringmaster Mack (Bryan Cranston), business is declining until an adorable baby pachyderm named Ruby (voiced by Brooklyn Prince) arrives, and Ivan considers how to change the constricted confines of their lives.

Based on Katherine Applegate’s Newberry Medal 2012 best-seller, it’s adapted by Mike White and directed by Thea Sharrock with cinematography by Florian Ballhaus. Reminiscent of Charlotte’s Web, it’s family-friendly, filled with a poignant melancholy.

Angelina Jolie recalls her daughter Shiloh read the book and urged her to get involved as one of the producers: “This younger generation is aware of what’s happening in the world to our natural habitats, to these animals – the gorillas, the elephants. As a mother, as an artist, this film is important.”

FYI: The ‘real’ Ivan lived at B&I Amusement Center in Tacoma, Washington, for 27 years, having been raised by humans until he was six. After protests by animal rights activists, he was sent to Zoo Atlanta.

On the Granger Movie Gauge of 1 to 10, The One and Only Ivan is a sweet 6, a touching, tender tale for tiny tots.