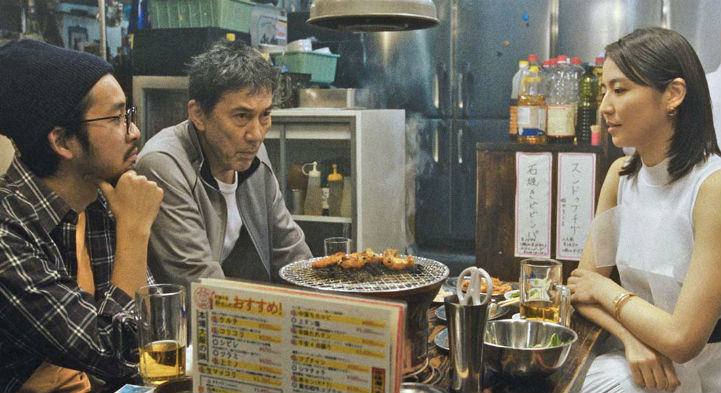 Beginning her career working on Hirokazu Koreeda’s After Life (1998) while she was a university student, award-winning Miwa Nishikawa is now firmly established as one of the most internationally acclaimed filmmakers working in Japan today. Koreeda would produce her feature debut Wild Berries in 2003, garnering her the first of her many formal accolades, and her 2012 film Dreams for Sale in particular brought her to global attention as it traveled the international film festival circuit.

On the back of Dreams for Sale’s past inclusion in the Toronto International Film Festival’s programme, Nishikawa is festival alumni, marking her most recent return to festival in 2020 with Under the Open Sky. The film follows the story of one-time yakuza Mikami (Kôji Yakusho) who, when we first meet him, is in the process of being released from jail thirteen years after being found guilty of viciously murdering a man who was threatening Mikami’s pregnant wife. As his possessions are returned to him before his departure, he is symbolically informed that the expensive watch that was put into storage when he entered prison has rusted and no longer works. It may not be a subtle metaphor, but it is an effective one: time has stood still for Mikami, and the life of opulence he once led has now effectively atrophied.

Determined as he is to leave his life of crime behind him and go straight, Mikami discovers that the choices he must face outside of prison are not so black and white, facing multiple challenges that make his plan less straightforward than he imagined. There are the institutional hurdles that discriminate against ex-cons, the social stigma of being a murderer, his visible loneliness, his deteriorating health, and – perhaps more than anything else – his inability to control his temper.

And yet there is hope. With his license having expired while he was behind bars, Mikami sees being able to drive as a path to a much more legitimate way of living than that which marked his life before his imprisonment. He has the support of advocates, he makes friends, and he finds a sympathetic ear in a welfare officer who does what he can to support Mikami despite working in a rigid and largely unforgiving system.

Most central to the film, however, is Mikami’s relationship with Tsunoda (Taiga Nakano), a young, idealistic television director with dreams of being a novelist. The two men cross paths when Mikami contacts the television programme Tsunoda works for requesting their help in finding his mother, from whom he was separated from at only four years old. Entering an orphanage, by the age of eleven he had turned to crime, and by fourteen, he was in juvenile detention. Ten convictions and six incarcerations later, and Mikami’s life as a career criminal defined his identity in a fundamental way.

While Tsunoda is genuinely fascinated by Mikami’s determination to change his life, Tsunoda’s producer is excited more by the sensational tabloid aspects of Mikami’s story, amplifying the notoriety of the yakuza and exploiting Mikami’s short fuse and instinct to resolve conflict through violence. Tsunoda’s moral choice is an important part of the film’s dynamic, but Under the Open Sky is dominated very much by the trials and tribulations of Mikami himself as he struggles to adjust to his new life.

Accordingly, the film is largely carried by Kôji Yakusho’s performance, he himself a director and writer renowned for his work with filmmakers including Kiyoshi Kurosawa, Takashi Miike, and starring in Koreeda’s thriller The Third Murder which screened in competition at the Venice Film Festival in 2017. As Mikami, Yakusho offers a complex character portrait of a man in transition, and much of his performances hinges on what Mikami struggles to visibly repress as much as his more emotional outbursts.

Under the Open Sky was also written by Nishikawa (herself an author as well as a filmmaker and screenwriter), and her sense of narrative structure and timing are clearly strong points. In this unambiguously emotive film, we discover a man in a moral and psychological tug of war, caught between trying to do the right thing as he struggles to reframe concepts such as honor and survival which for him were very much defined by his formative experiences within the yakuza.

At times, Under the Open Sky struggles under the weight of its simplistic pop psychology that at its weakest moments verge on hokey in its treatment of childhood trauma. This film is unambiguous in its status as a social issues melodrama, with all the pros and cons that this combination implies. But at its heart is Yakusho’s moving performance, a legendary actor whose ability to play challenging characters in times of flux has largely marked his best work. Under the Open Sky may not be the most original film of the year, but it is undeniably touching, due in large part to the combination of director Miwa Nishikawa and actor Kôji Yakusho’s empathy for complex characters.