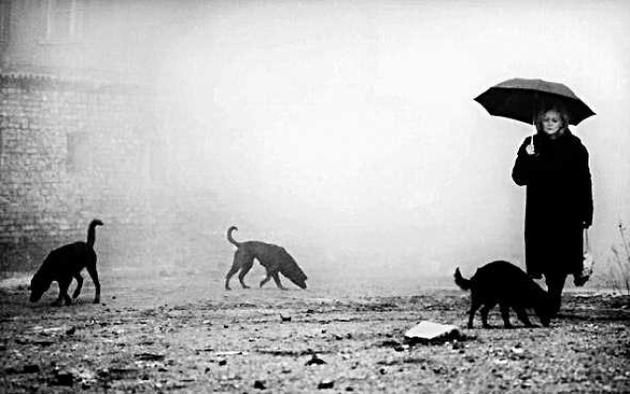 Damnation relates a powerful, sorrowful tale in a Hungarian village.

Fans of Hungarian director Béla Tarr (count me as one) admire his distinctive style. The camera creeps slowly, all but imperceptibly, to reframe evocative black-and-white compositions. Long shots and lengthy takes unfold at a meditative pace, compositions often held after characters have exited the frame. Rain literally and figuratively defines the atmosphere as characters struggle with their emotional and physical entrapment.

All of this is magnificently on display in Tarr’s 1988 Damnation, co-written by Tarr and László Krasznahorkai, a collaborator with Tarr on four of his other films. Set in a small, coal-mining village far from Budapest, the bare bones story focuses on Karrer, obsessively in love with an indifferent singer at the dreary Titanik bar, a meaningful name given the occasional downpours and the uninterrupted movement toward disaster. In fact, a palpable sense of dread defines every scene, beginning with the opening shot of industrial coal buckets transported via an elevated cable mechanism (rather like a ski lift) moving diagonally across the frame as grinding, grating sound drones on. Surely, nothing good will happen here as Karrer pursues his passion.

Presented with a chance to make money smuggling “a package” for the Titanik’s devious owner, Karrer offers the opportunity to the singer’s husband under the pretense of helping him pay off substantial debts but, to abet Karrer’s opportunistic designs, to get him out of town. Among the supporting characters in this drama, a savvy, observant coat check woman delivers the most insightful, painfully truthful observations, describing the singer to Karrer as a leech and “a bottomless swamp.” Nevertheless, Karrer believes he can’t live without the singer, who is, significantly, never given a name.

Various interactions unfold with minimal dialogue, suggesting these individuals can not connect in this desolate, decaying wasteland even when they make an effort to relate. Typical of Tarr in its inclusion and tone, a protracted communal dance feels more funereal than celebratory. Further, in another Tarr signature, the stray dogs that punctuate scenes and endure pounding rain say a great deal about the individuals with whom they share bleak, miserable outdoor areas devoid of any hint of sunlight. The last scene that merges the human with the canine makes its point with sledgehammer power.

Tarr masterfully presents this gloomy milieu with depressed individuals through a minimalist style, thereby achieving a haunting, mesmerizing effect. No spoilers, but events don’t go as Karrer hoped. However, that opens space for the sparse commentary to include provocative statements at often unexpected moments. At those junctures, metaphysical considerations jolt the viewer from a hypnotic immersion in the meditative unfolding of events. For example, and I quote Karrer at length here as he says, “I’m afraid of children, because those innocent bright blue eyes, those blond plaits, those tinkling voices, hide a stealthy and ruthless power and its purpose is to maintain the madness of hopelessness . . . to ridicule all resistance without the tiniest chance of salvation.” In other words, we are all damned.

And yet, so beautiful are the tableaus, so profoundly powerful the performances that the despondent individuals in their dismal story keep Damnation from feeling as unappealing as the title implies. In part, this also results from Tarr’s non-judgmental, microscopic investigation of the psychological makeup that defines his characters. He never turns away as he inspects their austere faces. And Tarr’s existential, philosophical elements impact everyone, questions about love and decency, innocence and hopelessness. Damnation is a singular, artistic achievement, unique to Tarr in providing ideas and actions to contemplate, if we dare, long after the two hour film has concluded. Béla Tarr supervised this 4K restoration of his 2014 release from its 35 millimeter film. The black-and-white images are gorgeous, a complement to his inspired ideas. In Hungarian with English subtitles.

Endnote: I must recommend The Turin Horse which begins with among the most astonishing, overwhelming opening shots in cinema.