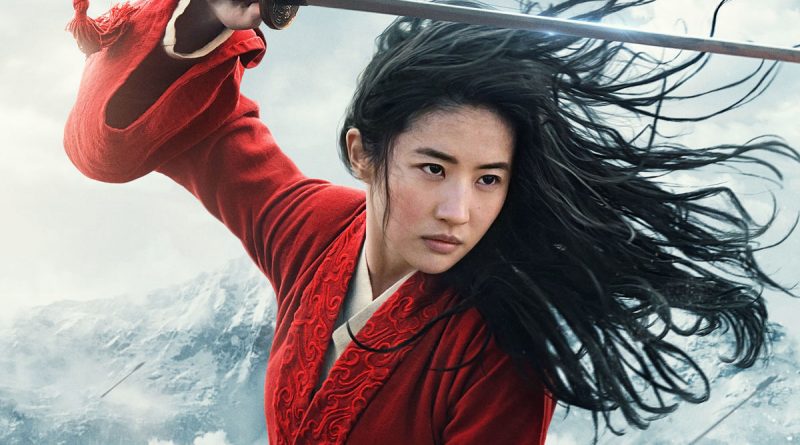 Nothing is simple and straightforward and uncontroversial in 2020, not even a live-action remake of a popular Disney animated film. Like the original, the new Mulan is based on the ancient Chinese ballad about a young woman who disguises herself as a man to take her ailing father’s place in the military.

There were repeated release date delays as Disney kept hoping for a theatrical release but COVID-19 restrictions kept theaters closed. Finally, Disney made an uneasy compromise. The film would come to us in our homes, to DisneyPlus subscribers, but only with a $30 surcharge.

The earlier Mulan was bright and cheerful and kid-friendly with comic highlights and bright, bouncy songs. The title character was played by Ming-Na Wen, a Chinese-American actress. Other voice actors in the film included Donny Osmond (as Mulan’s military superior and possibly love interest), Harvey Fierstein, and June Foray as Chinese characters, with Eddie Murphy as a Chinese dragon. 22 years later, we are all more sensitive on issues of race and gender in film. There are the obvious and easy changes, an all-Asian cast, for example. But in the #metoo era, the issue of a romantic relationship involving someone in a supervisory relationship is more troubling and so that plot element is all but eliminated. The most significant and intriguing change is the addition of a new character, another female, played by Gong Li. While they are on opposite sides, she is a mirror for Mulan, a vision of a future for a woman who has strong chi in a culture that does not want women to have strong anything.

The movie has received mixed reviews, just 76 percent positive on Rotten Tomatoes. Some critics admired its mythic, feminist tone. In those in the positive camp, AWFJ endorsed the new Mulan as its Movie of the Week for September 11. (Disclosure: I am a member of AWFJ and am on the MOTW team). Other critics could not get past their expectations that the film would include a smart-talking dragon and some slapstick training montages. In Time Out, Philip De Semlyen wrote, “Talking animals and slapstick silliness are very much out and stiff-lipped themes of family, duty and honor are in.” Joe Morgenstern sighed in the Wall Street Journal, ” It’s an efficient retelling of a tale about a young Chinese woman discovering her power — affecting at times, occasionally quite lovely, but earnest, often clumsy, and notably short on joy.” Allison Wilmore wrote in New York Magazine, “If someone were to do a shot every time a character mentions ‘honor,’ they would surely die of alcohol poisoning before the credits roll under a new recording of ‘Reflection’ from Christina Aguilera.”

On rogerebert.com, Christy Lemire found a lot to like: “Its origins date back centuries, and its animated predecessor is beloved within the ’90s Disney canon, but the latest version of Mulan couldn’t be more relevant, vital, and alive.” And IndieWire’s Kate Erlband called it, “A timeless message made for right now.”

Unsurprisingly, there are few reviews from Chinese-American critics. Inkoo Kang’s review in The Hollywood Reporter brings a vital perspective:

Earlier this year, producer Jason Reed said that the remake was designed to appeal to both American and Chinese audiences. The result is a creatively squeamish, pokily paced movie by committee that has four credited screenwriters, a slew of hackneyed Disney tropes and an enervating lack of emotional resonance. No wonder it relies so heavily on the 1998 animated film for its musical cues — the nostalgia from the instrumental snippets of Reflection are the only reason to feel anything. Despite all the splendor, there’s little sense of vision.

In the earlier Mulan, the title character (voiced by Ming-Na Wen, who appears in a welcome cameo) was a tomboy next door who put herself through a grueling yet heartening man-making process. Her fellow recruits were stock types, but they helped ground her journey amid soldierly camaraderie. Caro’s Mulan, in contrast, is yet another superhero origin story, the protagonist (Liu Yifei) facing off in part against yet another psychologically wounded villainess (Gong Li) longing for a world that would accept female power. But both Mulan and Gong’s Xianniang are so thinly sketched that the parallels between them — and the forces that keep them apart — demand as much interest as the inside of a shoe.

One of the most insightful responses to the film is not a review but a discussion, the starting point a difference between the two versions many people might overlook. In the animated film, Mulan slices her long black hair with the sword to help her look more masculine. Original star Ming-Na Wen (who appears briefly in the new version) objected.

But in Polygon, Asian-American critic Petrana Radulovic says the new version is more authentic, historically and dramatically. But the original, she says, symbolized the East/West bridge of the story:

[W]hile removing the scene updates Mulan to resonate more with Chinese culture, it’s also an ironic loss, because that sequence so specifically grounded the animated movie in the Chinese legend. It’s a highly Westernized scene, but the intent behind it gave the film an Eastern ethos that set its tone and visual language. It also ended up capturing a distinct feeling of cultural hybridity that resonated deeply with me and other young Asian-Americans…. Chinese audiences openly mocked the haircut scene when the animated Mulan played overseas. Historically, Mulan cutting her hair wouldn’t have made her look more masculine, because throughout China’s past, men kept their hair long….until the 20th century, long hair was the norm across gender in Chinese culture…. While this scene alienated Chinese audiences, it also pivots Mulan sharply away from the motivations of the rest of the Renaissance-era Disney princesses, and pushes her back toward the original Chinese legend.

There are also calls for a boycott of the film over issues surrounding the film that do not relate to its quality as a work of art or entertainment but the impact of the business deals behind it as a reflection of geopolitics. Isaac Stone Fish writes in the Washington Post:

In the credits, Disney offers a special thanks to more than a dozen Chinese institutions that helped with the film. These include four Chinese Communist Party propaganda departments in the region of Xinjiang as well as the Public Security Bureau of the city of Turpan in the same region — organizations that are facilitating crimes against humanity. It’s sufficiently astonishing that it bears repeating: Disney has thanked four propaganda departments and a public security bureau in Xinjiang, a region in northwest China that is the site of one of the world’s worst human rights abuses happening today…. Why did Disney need to work in Xinjiang? It didn’t. There are plenty of other regions in China, and countries around the world, that offer the starkly beautiful mountain scenery present in the film. But in doing so, Disney helps normalize a crime against humanity.

Mulan star Liu Yifei, a naturalized US citizen, reposted a viral comment in support of the Hong Kong crackdown on protesters on Chinese social media platform Weibo, also leading to calls for boycotts.

Whether Mulan will make back its budget, the highest ever for a film directed by a woman, we do not know, any more than we can guess what the box office would have been if it had opened in theaters as planned at the height of the summer movie blockbuster season. But we do know that whether it intended to or not, it has achieved one of the essential goals of any work of art in provoking thoughtful conversations that transcend but are illuminated by the story we see on whatever screen we see it on.