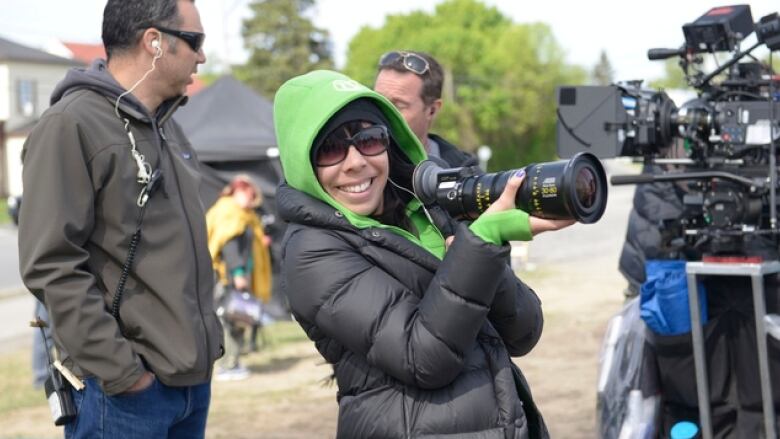 Tracey Deer draws from her own life in Beans. Rocks pelting a car she was riding in created a defining moment in Mohawk filmmaker Tracey Deer’s life. It was 1990 and Deer was just 12, a youngster growing up in the Kahnawake First Nations Reserve riding in a caravan of women, elders, and children when stones and racist invective rained down on the group as they crossed the Mercier Bridge. It was a flash point of the Oka Crisis in which the tribe fought back against a Quebec town’s attempt to expand a golf course onto their lands by blockading the bridge and other roads. For Deer, it is a moment seared in her memory and one that is at the heart of Beans, the award-winning documentary filmmaker’s (Mohawk Girls, Club Native) narrative feature debut that premieres at the Toronto International Film Festival.

“So, I went into that summer just as a blissful happy-go-lucky, imaginative, sensitive kid,” Deer says in a pre-festival phone call.
“I was just living my life and then that summer happened and my understanding of who I was in relation to everyone else, that was shattered, the innocence and safety was shattered. And understanding who I was as an indigenous woman, and how I was viewed and treated by the outside world is really what happened that summer.”

“That event with the stones has shaped my entire life, both good and bad,” she continues. “I suffered from self-worth issues and depression and I’ve had lots of suicidal thoughts. I do think that they stem back to this lesson that moment taught me, that my life was not important, that I was useless, that it was okay to harm me in that way.”

It is history that Deer wrestled with in the eight years it took her to complete her screenplay. In the drama, the Oka Crisis is one more thing for 12-year-old Beans (Kiawentiio) to wrestle with during a summer where she is beginning the transition from girl to woman.

“In terms of how much of that little girl is me, I would say that the emotional journey she goes on is very much ripped from my life,” Deer says. “I did not experience all of those events, by putting her in that event and experiencing the level of racism or violence that she does, it correlates with my own experience.

“She’s definitely a fictional character that I’ve taken on a journey. The story is inspired by my own coming-of-age journey that really stretched from 12 into my 20s. And I’ve condensed it into this one summer for this character.”

Over the near-decade Deer spent writing, the story evolved. In the beginning, it was much more concerned with the Oka Crisis itself with Beans injected into it. Over time, Deer realized that while the crisis and its ramifications were part of the narrative, it didn’t make sense to make that so central. Beans is the tale of a 12-year-old girl. When Deer thought back to her tween self, she realized she was a child, looking at events through a child’s eyes.

“Often, I had no idea what was going on. And if I was to be true to a coming-of-age story, then I have to be true to that. And so that’s when the Oka Crisis moved into more of a backdrop to her story,” she says.

One scene ripped from Deer’s own life that she chose to include in Beans is a recreation of that angry, racist mob throwing stones at the Mercier Bridge. It is a visceral moment in the film, Beans and her family’s fear is palpable and so is the rage and hate of the snarling crowd. Deer describes shooting it as the hardest day she has spent on a set.

“The biggest challenge was to have to revisit that and remain grounded in order to be there for my cast and my crew and get the material we needed in order to tell the story. It was incredibly difficult for me emotionally,” Deer says.

“But I think it was also very healing to have gone through it and to be able to share that experience with the world, and hopefully to be opening hearts. It was a way to change the story that the trauma has had on my life in a way and to not be alone in that experience or those feelings anymore.”

The Oka Crisis was 30 years ago. Beans makes it premiere at a COVID-19-altered TIFF during another moment of social change as protests south of the border in the United States continue in the wake of George Floyd’s murder in May. The protests have not been confined to the US and have happened in Canada as well. The timing of Beans’ debut is not lost on Deer.

“This has been our reality and we have been speaking about it and fighting for change and fighting for our rights and demanding dignity forever,” she says. “It feels like we are now in a moment where people are opening their eyes and opening their hearts and are ready to hear it and ready to take action. It’s gonna take an entire society for things to change, and it’s not on us to make those changes happen like we need. We need everybody else to make those changes happen.

“The film we shot last fall is a story that indigenous people and, I think black and people of color, we’re all very connected to. It’s not a new story. The difference is now that it’s coming out in the time that we’re living, I feel like it can have impact in building allies and helping to motivate change. It just feels like the universe has aligned that the film is coming out in this time, I hope to have as big of an impact as it possibly can.”