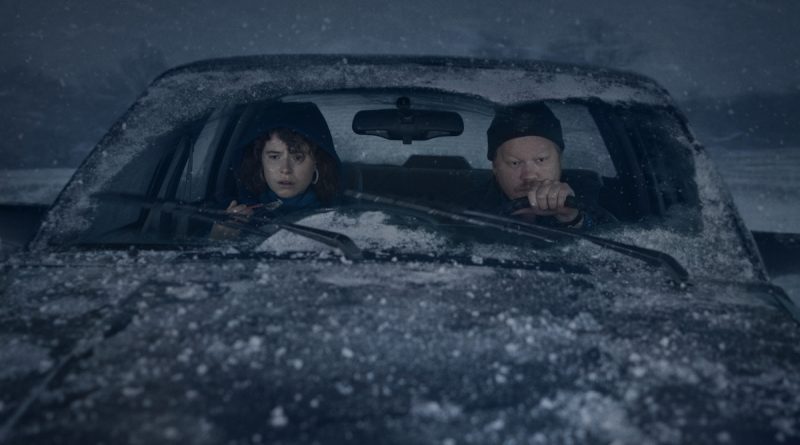 In the closing credits of I’m Thinking of Ending Things, its protagonist (Jessie Buckley) is simply called ‘Young Woman’. But, in the film itself, her name could be Lucy, or Louisa, or even Lucia. She’s dating Jake (Jesse Plemons), a relationship that she’s certain is new and yet also feels as if it has spanned a considerable period. As a job, she might be a physics student, an artist, a waitress or a film critic with very specific thoughts about John Cassavetes’ A Woman Under the Influence. And, when she takes a drive through Oklahoma to meet Jake’s parents (Toni Collette and David Thewlis) for the first time, they could be standard-issue middle-aged eccentrics — the kind of kooky in-laws that everyone comically dreads meeting, especially in movies — or they might be significantly more prolonged in the ageing process.

Its title is a statement of uncertainty, so it should come as no surprise that much is far from firm within I’m Thinking of Ending Things, Charlie Kaufman’s latest feature. His third as a director or co-director after Synecdoche, New York and Anomalisa — and his eighth as a screenwriter following Being John Malkovich, Human Nature, Adaptation, Confessions of a Dangerous Mind and Eternal Sunshine of the Spotless Mind, too — it’s yet another of his playful yet contemplative existential musings that take both its characters and its viewers on a wild, revealing, mind-bending tide. It’s also another jolting and stimulating experience, the way that most Kaufman films are. Surreal and always searching for meaning, his work feels like it’s in a genre of its own, whether he’s helming or simply penning a feature. That’s the case here, naturally, as he also challenges viewers to ponder their grasp on their own existence once more.

As intercut with clips of an elderly janitor (Guy Boyd), which the film switches to from time to time, I’m Thing of Ending Things’ protagonist is similarly pondering. She’s thinking about ending things with Jake, even though they’re embarking on this wintry homebound trip. She ruminates over the decision as they drive, with the journey seeming as endless as the snowy vista she stares at so she doesn’t have to look at her boyfriend. She deliberates as Jake proudly takes her on a tour of the farm he grew up on, as they wait for an extended period for his mother and father to greet them, and as dinner becomes as lively as it is awkward and anxious. Of course, this being a Kaufman film, the Young Woman’s possible plans to farewell her relationship at an inopportune time were never going to comprise the movie’s full story. Those glimpses of the janitor aren’t just filler, after all. That said, also because this is a Kaufman film, notions of choice, identity and what our lives mean were always going to weigh heavily — including upon its flame-haired central figure’s main train of thought.

Adapting the novel of the same name by Iain Reid, I’m Thing of Ending Things makes good on its moniker by letting its audience into the protagonist’s head — though not as literally as Being John Malkovich, nor as creatively as Eternal Sunshine of the Spotless Mind. The Young Woman thinks about ending things, and her stream-of-consciousness mutterings to herself double as narration. When she’s interrupted, usually by having to reluctantly talk to Jake, the voiceover stops. When their conversation fades, her inner monologue endeavours to pick up again. Accordingly, I’m Thing of Ending Things, truly is a film about thinking, which is also accurate in other ways best discovered by watching. Kaufman’s genius here is his ability to capture the way that thoughts scatter and recur; how they cherry-pick from the sights, sounds and influences around us; how memories are thoroughly unreliable; and how the imaginings in our head shape our entire worlds — even in seemingly mundane situations that are always laden with the potential to transcend routine.

It takes a particular kind of on-screen talent, or several, to help bring Kaufman’s movies to life — to do his twisty tales justice, to ground their equally mischievous and philosophical leaps, and to make everyone watching feel the same way as the feature’s characters. Already a standout in Beast, Wild Rose and Chernobyl, Buckley is up the task. Indeed, she achieves an especially impressive feat in film that never, not once, is designed to go down smoothly. She plays a character both actively thinking and constantly swept up by thoughts beyond her control, while also navigating a strange house with a staircase that appears to go on forever, a roadside stop for dessert that’s instantly unsettling and, in a sprawling high school, an impromptu ballet. The Young Woman is as beset on all sides by surprises, as confronted with sudden shifts and as at the mercy of someone else’s bidding as I’m Thing of Ending Things’ viewers. And yet, she’s continually, resolutely, sometimes borderline inexplicably intricate, distinctive and fleshed-out.

Buckley isn’t alone; Plemons does likeable yet also needling with aplomb, and Collette and Thewlis unleash a veritable two-person show as Jake’s ever-changing parents. The cast also has I’m Thinking of Ending Things’ detailed imagery for company, given that there’s little in Kaufman and cinematographer Łukasz Żal’s (Cold War) 4:3 frames that doesn’t scream for attention — be it the lack of seatbelts across the Young Woman and Jake’s bodies, telltale piles of books or swathes of wallpaper. Those elaborate performances and visuals serve another purpose too, with Kaufman yet again drawn to the overwhelming nature of the human condition, and also once more determined to bake that sensation into every second of the film. In fact, even as the road whiles by, chats about musicals drag on and clumsy silences expand to fill rooms, there’s so much going on here despite the deceptively simple concept, that the end product makes viewers feel as if they’re caught in a maze of rapidly firing synapses. Expectedly, that’s an experience that requires commitment on the audience’s part, but also proves mesmerizing, rewarding and typically Kaufman-esque.