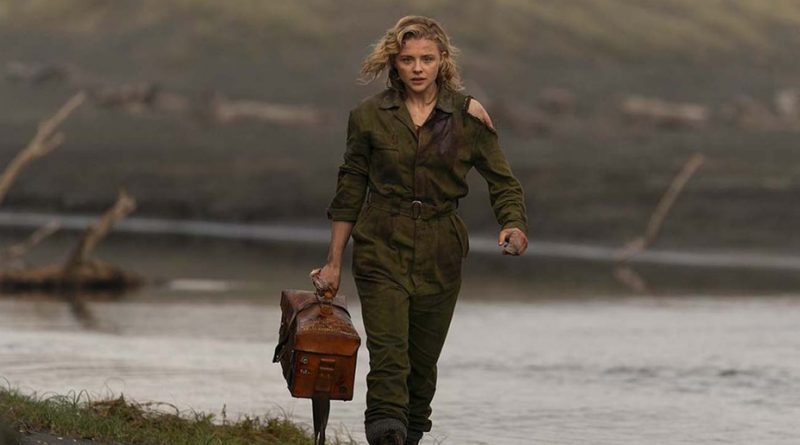 Roseanne Liang’s latest film Shadow in the Cloud might be ostensibly set in 1943 during World War II, but the horrors that her protagonist Maude (Chloë Grace Moretz) face are rich with contemporary resonance that has all the subtlety of a punch in the gut. For any woman who has had her professional abilities diminished by men because of her gender, for any woman who has felt excluded, isolated or even threatened by the ‘boys club’ of the workplace, for any woman who has felt her voice, expertise and knowledge are belittled and ignored and mocked, be it openly or subtly: this is a horror film that echoes with the ubiquitous horrors that far too many of us live through on a daily basis.

With its world premiere at the 2020 Toronto International Film Festival, in Shadow in the Cloud Moretz plays Maude Garrett, a skilled WAAF officer who arrives at the last minute to join a flight in an old B-17 Flying Fortress so beaten up that the plane is barely functional even before it takes off. The all-male crew of the flight are far from welcoming; some are explicitly salacious, some are aggressively insulting, and a spectrum of ugly responses that lie in between. Liang’s screenplay hammers in the violence of language thick and fast from the film’s outset, and across the movie’s runtime we hear Maude called “dame”, “broad”, “missy”, a “stuck up tart”, “girly”, “stealth pussy”, “baby”, “sweetheart”, “slut” and “witch”. The politics of naming is openly acknowledged in terms of the fundamentals of basic respect; while the male crew insist on being called by their official titles, they refuse to reciprocate this gesture with Maude, calling her simply “Miss Garrett” or just “Garrett”. When she rightly complains, she is mocked, and when she is rightly angered by this, she is accused of being hysterical.

Trapped in the ball turret underneath the plane, at the heart of Maude’s journey lies her discovery that aside from having to deal with the nightmare of her male colleagues, there is a more supernatural threat afoot outside the plane that threatens their very survival. When her first-hand experience is dismissed by her male colleagues as female whimsy, by the time the consequences of their unwelcome passenger are revealed, it is too late: what begins as a high-pressure dialogue driven interpersonal powder keg changes tone dramatically as it moves into its second act where it takes more of the shape of an action film as the supernatural threat becomes more tangible. It’s two-part tonal division will either work for a viewer or not, but if you can go with the transition the film maintains consistency through its escalating gender political thematics.

Chinese-New Zealand filmmaker Liang is an experienced director and writer with a background largely in comedy, but through the success of her 2017 action short Do No Harm, she smoothly transitions to darker feature-length genre material here in what is clearly a close collaboration with Moretz herself. Although filmed in New Zealand, as Moretz’s top billing suggests the film seems largely aimed at a mainstream North American market in particular, combining elements of Stephen King’s The Langoliers with Randall Jarrell’s The Death of the Ball Turrett Gunner, but shot through an undisguised feminist lens.

On this front, it would be disingenuous to ignore the fraught production history of the film, whose original writer was faced with a high number of sexual assult and sexual abuse allegations and was consequently severed from the project completely before Shadow in the Cloud went into production. Both Liang and Moretz have publicly discussed the lengths that Liang went to rework the original screenplay to make it very much her own and shift it as much as she could from the notoriety of this disgraced figure. On this front, it is difficult not to speculate that the sheer undisguised fury the film vents towards abusive men stems in some part at least from what must have surely been for Liang a horrifying revelation about the man she was professionally tethered to; this of course must pale in comparison to the actual abuse those who survived their encounters with him must have endured.

With this background knowledge in mind, it is almost impossible to not read Shadow in the Cloud on a broader level as reflecting Maude’s journey in the film itself: a woman in extremely difficult circumstances fights to survive and have her professional expertise recognized on her own merits in an industry where disgusting, violent sexual predators far too often rise to the top. But even without this information, Shadow in the Cloud is a satisfying genre ride that barrels along at a cracking pace, never sacrificing its thrills for her unwavering focus on gender politics, power, abuse and the perils of being a woman in a male-dominated workplace.