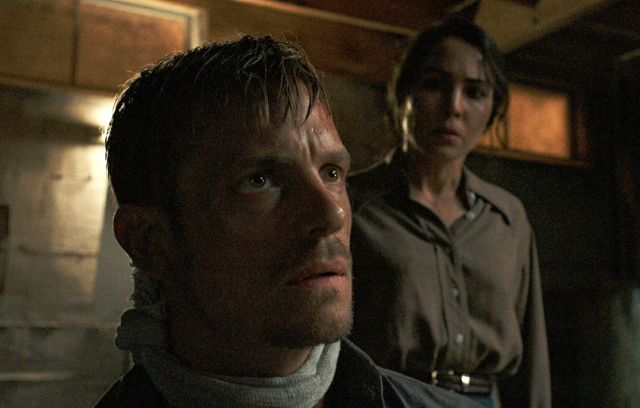 It feels wrong to criticize a movie that’s focused on punishing Nazis so, instead, let’s just say you need to go deeply into suspend disbelief mode to really appreciate this revenge thriller.

The Secrets We Keep stars Noomi Rapace as Maja, a suburban housewife from Romania, who is rebuilding her life post World War II, with her American husband, Lewis (Chris Messina) and their young son, Patrick. They live in generic small town U.S.A., which can be terrifying in itself.

One day, while doing her errands, Maja hears a stranger (Joel Kinnaman) whistling a familiar tune that has haunted her for years. Is her memory playing tricks on her or could this really be the man who brutally assaulted her and killed her sister in a concentration camp 15 years ago?

Convinced that it’s him, she asks him to help with her car, and manages to knock him unconscious and lock him in her trunk. (Remember, suspend disbelief.) She gets him to her house and explains the situation to her stunned husband, with whom she’d never shared the horrors of her personal history.

Lewis, however, can not suspend disbelief. The man, who is now tied up in their basement, is named Thomas although Maja insists he is Karl. He says he’s from Switzerland although Maja insists he’s German. Lewis is worried that Maja has the wrong man, and tries to talk her into letting the police take over. Of course, she refuses.

There’s plenty of violence – Rapace was the original Girl with the Dragon Tattoo, after all – but all Maja really wants is a confession, and she is willing to let him go back to his family if she gets it. She befriends his wife (Amy Seimetz), who has demanded the police launch a manhunt for her missing husband, and who admits that they got married quickly and she knows very little about his life.

Ultimately, The Secrets We Keep raises some thought-provoking and fascinating points about vengeance, forgiveness and redemption. And about never really knowing the people who live down the street – or in your own house.