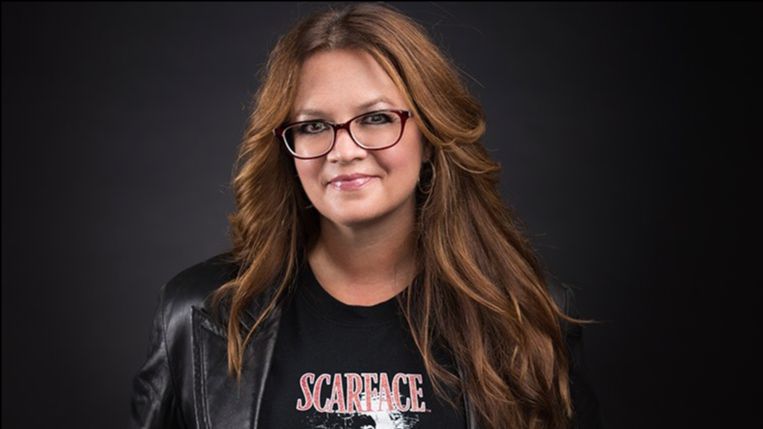 April Wright’s new documentary, Stuntwomen: The Untold Hollywood Story, which she wrote and directed, is garnering buzz. She’s chosen a topic that needs both awareness and recognition. Her source material is a book written in 2015 by Mollie Gregory of the same name. The film is an historical look at female stuntwomen, with a modern take on today’s filmmaking environment, in which stunt coordinators rehearse multiple viewpoints of a stunt, mapping out all of the moves before the camera begins to roll. Michelle Rodriguez, who’s spent an enormous amount of time with stunt coordinators on the Fast & Furious sets, is the film’s narrator.

Sarah Knight Adamson: What drew you to take on Stuntwomen: The Untold Hollywood Story as a project?

April Wright: I knew the producer, Marion Rosenberg. And there was a book called Stuntwomen: The Untold Hollywood Story that Mollie Gregory had written, and she wanted to turn it into a documentary. I had a take on how to bring the book alive, and I wanted the younger females to discuss what they’ve been taught by some of the living legends—to hear the stories directly from them. As you can see, I was really interested in stuntwomen. It was a topic I didn’t know that much about, but I also liked it. I liked the aspect of looking at the whole entertainment business and the history of Hollywood and how this fit in.

Sarah Knight Adamson: What did Michelle Rodriguez bring to your movie?

April Wright: We reached out to her because we could see videos of her all over the internet, where she was speaking out on behalf of stuntwomen. One of the Fast & Furious movies apparently didn’t put the set performers in the credits, and they didn’t invite them to the premiere, and she was really vocal about how important they were to the films, how they should get credit. She’s also a feminist and very supportive of women making inroads in fields dominated by men, which this field certainly is. When I talked to her about the concept, she just loved it, and she said, “Tell me whatever you want me to do. I will do it.”

Sarah Knight Adamson: Your research is so detailed. I appreciate that because I come from a teaching background, and I like to research. I think that’s part of why I like to review documentary films because I want to find out more about a topic. What role did you have in the research process?

April Wright: Mollie had done a wonderful job with the book. It was excellent. It’s very much like a textbook that has a great deal of detail. The book goes up until about 2007, so I had to continue forward up to the present day, where actually a lot has happened. There’s been a lot more female-driven content at that time. The book was wonderful, and then I did a lot to complement it, helping show it visually.

Sarah Knight Adamson: What do you enjoy about the research process?

April Wright: All my documentaries, even my narrative work, are often based on true stories. I really like that, especially for me showing the context of different things that were happening at the time. So, if you understand, for example, what was going on with women’s rights and civil rights movements, it makes sense that some of these other things were happening at the same time. And so the women in the film are saying that with these pictures we also put. And I think it helps people understand a topic better, the more you can understand that context of how it fits in and why people were doing certain things. So, I love putting things together and finding different pieces of information from different sources and seeing where they overlap, how does that fit in, and fill in all the points of view of the story? I really do like that part of the process.

April Wright: Well, I try just to make sure that I’m telling the story honestly and with integrity and reflecting the truth. For Stuntwomen, there are some difficult chapters where people are injured, when we get into that in the film or where we’re talking about some of the struggles that they’ve had as women, and being able to tell that honestly, in the way that they would want it to be told. You need to sort of get to know the women and get inside that community so that I’m not on the outside looking in and projecting what I feel on them. I try to get inside, get to know them so that I’m telling the story with their voice. I’m telling the story of how they want it to be told with what they think is important. And I think that’s a little bit of nuance as a documentary filmmaker and you end up with a better story if you really listen to your subject and let them tell you how to shape it, how to tell the story.