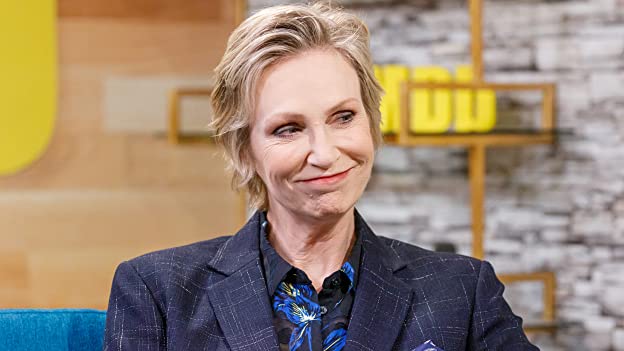 Jane Lynch is now hosting The Weakest Link, a game show where the contestants can win a million bucks, if they can come up with the right answers to absurdly difficult trivia questions about any and every obscure thing under the sun. If they don’t get it right, they’re their teams weakest link and get kicked off the intellectual island, so to speak. As host, Jane Lynch has the intimidation factor down, But Jeanne Wolf wants to know how she’d fare if she were competing and having to answer those touch questions instead of asking them.

JL: Exactly. It’s an education and it’s also wonderful to sit back and realize that I knew a lot of those answers. That’s affirming, I think.

JW: How many hundreds of times have you practiced saying, “You’re the weakest link… goodbye!” Do you have variations?

JL: I do have variations but that’s one thing I did not do is practice it because I knew it would come out contrived. I motivate it every time so it always comes out different.

JW: Will you say, “You’re the weakest link… goodbye!” like Sue on Glee? Everyone expects you to be mean now!

JW: You have a way, when you’re hosting, of making us think you’re talking to us. How do you do that?

JW: Is it funny that people expect you to be like Sue, even after all of this time?

JL: No, I love it. It’s great. It is funny but I always say that Sue Sylvester lives about a quarter of an inch beneath my own Jane Lynch skin so I can tap into that rage pretty quickly.

JW: You know, the buzz has been very complimentary about you coming to host this. The press has always been pretty fair with you. How did you learn to handle interviews and how much you would share or how much you would hold back?

JL: You know, I think I overshared at the beginning. I got married and divorced within an hour (Laughs), I was very public about all of it. I think it’s almost the same as hosting. I talk to people as a person and I’m not concerned about my brand. I’m not concerned about sound bites. I just have a conversation with people. You can never go wrong – except with oversharing but I try not to do too much of that.

JL: I’m bringing a persona to both but I’m much more present in my own personality when I’m hosting and my care and emotionality is genuine. Then I put on little stuff to do the clap backs. When I’m acting, I’ve surrendered myself – my personality – to a few selective attributes that embody this character. I’m, of course, confined by the script and the given circumstances of the piece. Where as with hosting I’m bring myself with different “scarfs”.

JW: I hope you know how appreciated you are by your audience.

JL: Thank you so much, Jeanne. That’s very sweet of you to say.

EDITOR’S NOTE: Tune in to AWFJ’s YouTube Channel to watch the video of Jane Lynch on THE WEAKEST LINK, Personal Branding and Being Mean – Jeanne Wolf interviews