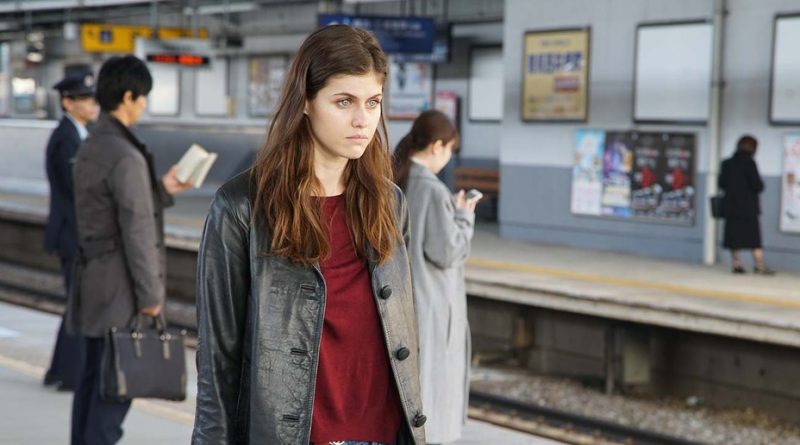 Adapted from the 2006 novel by Catherine Hanrahan, based on her own experiences living in Tokyo and scripted for the screen by the author herself, Lost Girls & Love Hotels isn’t a traditional romance, but it relies upon a well-worn romantic idea. While the notion that you can both lose and find yourself through travel, and via relocating to a busy big city far away from your usual troubles, may be based in truth, it’s so frequently trotted out as a piece of profound wisdom and as the foundation for contemplative stories about yearning, searching souls that it often plays as a cliché. Alas, that’s the case in this Tokyo-set feature, which overtly strives for authenticity and challenge, yet remains content to fall into familiar grooves. It’s a movie that conscientiously roams parts of the Japanese capital that are never seen in tourist brochures, for example, while also ensuring that Mount Fuji peeks prominently and neatly through a bullet train window, Tokyo Skytree towers down over its protagonist, and the crowds on Shibuya’s famed scramble crossing also earn attention — an approach that smacks of trying to have things two ways, and also typifies much about the movie.

Margaret (Alexandra Daddario) only wants to live her life on one fashion, though: in a haze of booze consumed long into the night in tiny izakayas, then underneath the heaving body of whichever stranger she has picked up and accompanied to a love hotel. She works by day, at a school for flight attendants where she helps them perfect their pronunciation of English, and also earns warnings from her boss about rolling in disheveled from the night before. Written across her perpetually empty gaze and her resigned slouch, however, is the fact that she’d always rather be in one of her two neon-lit favourite places. That said, where short-term accommodation for anonymous sex is concerned, she’s never picky about the establishment.

Lost Girls & Love Hotels doesn’t judge Margaret, including for her penchant for playing submissive with her one-time paramours on any given evening, but it does make it apparent that she isn’t finding the bliss she seeks in her current lifestyle. During a deep-and-meaningful chat late in the film, she verbalizes that she feels ‘far sick’ — not clamoring to return home, but desperate to be as removed from her idea of normality as possible — and Lost Girls & Love Hotels endeavors heartily to make its frames epitomize that sentiment. And yet, Margaret’s ongoing dalliance with a handsome yakuza called Kazu (Takehiro Hira) threatens to undercut this intended feeling, even though it’s designed to reflect how far she’s willing to run. He’s a stereotypical gangster with a hidden soft and caring side, as well as commitments that mean they can never be together permanently, and she melts into a needy, clingy cartoon in his presence. The movie attempts to use their connection to show what she’s both fleeing and seeking, and yet it merely demonstrates that the film is willing to make its protagonist devolve into a specific, recognizable type, and to fall back on convention itself.

In her meatiest big-screen role for some time, Daddario tries to give Margaret more depth than the script offers. Director William Olsson likes to peer ruminatively at his star, to let the character’s sorrow seep from her every look and move, and Daddario possesses an air of weighty malaise that fits this aim. Still, given that script largely calls for her to hit the same few emotional notes again and again, there’s little room for her to deliver much in the way of texture. Indeed, the viewers’ perception of Margaret doesn’t change in Lost Girls & Love Hotels, because she barely appears to change herself. Instead, she cycles through shades of the same listless, restless attitude. That could’ve been the film’s statement, and an astute one, but it opts to chase catharsis and transformation. Sadly, even when a big awakening is supposed to have taken place, Margaret seems like the same lost young woman — just with a smile on her face rather than a forlorn glare.

While interspliced with the aforementioned postcard-style glimpses — albeit never as slick as that description might intimate, but still depicting Tokyo’s standard sights — Lost Girls & Love Hotels does boast an intricate sense of its setting. A place where everything seems to be happening at once, yet where calm and order are as common sensations as hustle and bustle, this is a city that thrives on contrasts, which Olsson and Hanrahan clearly understand. As a result, you could read the movie’s repeated determination to flit between genuine details, moments and images, and their formulaic, thoroughly expected counterparts, as a comment on the Japanese locale, although that might be being too generous. In Tokyo, shining lights, glossy attractions and cute cat cafes sit side-by-side with dank alleys and hole-in-wall bars, and unassumingly. With Lost Girls & Love Hotels, the film strenuously grasps at grimy resonance, but also forcefully relies on ticking the easiest, most blatant of boxes.