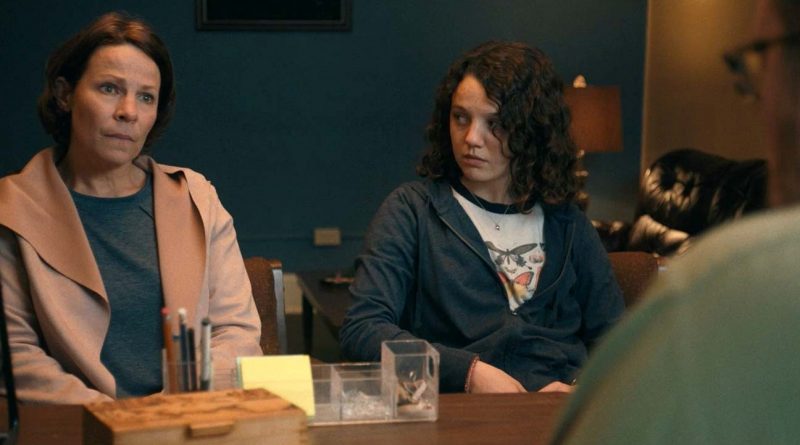 Confronting reality can be a daunting challenge. Especially when your reality includes a loved one whose tenuous grasp of same keeps slipping away, day by day.

That’s the premise — and the point — of Paper Spiders, a sensitive, bittersweet tale of mental illness’ impact.

As the movie opens, mother Dawn (Lili Taylor) and daughter Melanie (Stefania LaVie Owen) are touring the University of Southern California, where Melanie hopes to follow in her late father’s footsteps.

On the flight back to their Syracuse, N.Y., home, as they collaborate on a crossword puzzle, the mother-daughter team radiates a closer-than-close camaraderie — and loving yet undeniably edgy tension.

“Why did I push you you to get straight A’s?” Dawn muses. “If I only knew I was pushing you straight out the door … “

As Paper Spiders continues, it’s clear the widowed Dawn’s worries are more than impending empty-nest syndrome. Especially when a confrontation with a new neighbor triggers an ever-escalating sense of what most people would describe as paranoia.

A school counselor tells Melanie her mother’s condition sounds like persecutory delusional disorder — and it keeps getting worse, even as Dawn denies there’s anything wrong. (Except for their neighbor’s supposedly threatening behavior, of course.)

As if Melanie doesn’t have enough challenges at home, her senior year presents another set of concerns, notably Daniel (sometimes buoyant, sometimes brooding Ian Nelson), a bad-boy rich kid with problems of his own.

The movie definitely treats Dawn’s illness with appropriate gravity. To its credit, however, Paper Spiders also features welcome doses of humor that add an it’s-all-part-of-life perspective to the somber complications.

For the most part, Inon Shampanier’s direction displays a similarly low-key approach — except when multiple musical montages kick in to underline (and overplay) Melanie’s increasing anguish.

Throughout, however, the movie’s compelling performances keep the focus where it belongs.

Owen brings an endearing energy and an aching wariness to a character who finds herself facing a potentially devastating choice: saving her mother or saving herself.

As for that mother, “she’s always been quirky, maybe a little neurotic,” as Melanie tells her guidance counselor. That perfectly describes Taylor’s offbeat, on-target talents. And Paper Spiders provides a worthy showcase for her portrait of a lost woman who’s as perplexing as she is perplexed.