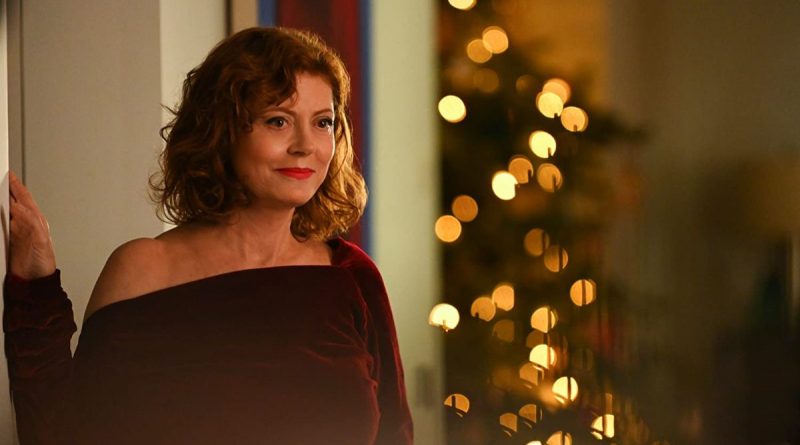 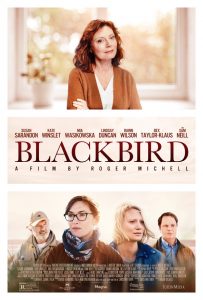 Sarandon stars as Lily, the elegant, independent matriarch of a small, privileged family whose magazine-ready beachfront home provides the setting for a weekend of reminiscing over delicious meals and fine wine — all as the lead up to Lily’s death. She’s terminally ill with ALS, and she wants to go out on her own terms, before the disease wreaks its full havoc on her body. Her doctor husband, Paul (Sam Neill), supports her decision, and her adult daughters — Type A wife/mother Jennifer (Kate Winslet) and struggling Anna (Mia Wasikowska) — have promised to honor it. But will they really be able to let Lily go when the time comes?

As the weekend builds toward Lily’s final curtain call, the family members share both fond memories and hard truths, and some surprising secrets are revealed. All of this provides meaty acting opportunities, and the talented cast tackles them with gusto. The women, especially, get to shine here, with Sarandon almost literally luminous in some scenes, thanks to excellent lighting and her always expressive eyes. And while oil-and-water siblings aren’t unusual in movies like this one, Winslet and Wasikowska bring depth to their roles as squabbling sisters who desperately want to reconnect.

For the most part, Michell gets out of the way and lets his cast do what he hired them to do — hash out Big Life Questions amid starkly beautiful surroundings. He knows that what audiences want from Blackbird is the opportunity to see these heavy hitters make us reach for the tissues, and that they certainly do. But the way the film tackles questions of choice, autonomy, and death with dignity will leave you thinking, too, as you dab away your tears.– Betsy Bozdech

Nikki Baughan: Featuring a powerful performance from Susan Sarandon as a terminally ill woman determined to die with dignity, this English-language remake of the 2014 Danish film Silent Heart is handled with sensitivity by director Roger Michell (Notting Hill, My Cousin Rachel). Kate Winslet and Mia Wasikowska are also excellent as her conflicted daughters, struggling to reconcile their mother’s wishes with their own grief; a prospect that gets increasingly more difficult as secrets are revealed. There’s no denying the fact that the film veers into tearkjerker territory, particularly in its final third, but there’s a deft and knowing humour laced throughout Christian Torpe’s screenplay – he also wrote the original – that stops it from becoming mawkish. It also looks absolutely glorious, cinematographer Mike Eley capturing the sweeping ocean vistas (while its set in the Hamptons it was actually shot on England’s South Coast) that form the perfect backdrop for the film’s churning emotions.

Leslie Combemale Death is never easy, and neither is this movie. Director Roger Michell’s Blackbird approaches a very tough subject of the right to die, and how that choice impacts a whole family. Lily (Susan Sarandon) has chosen to end her inevitable decline from ALS, and unfinished business with her daughters Jennifer (Kate Winslet) and Anna (Mia Wasikowska), as well as the challenge of letting go, lead to an intense weekend. This ensemble cast, which includes Lindsay Duncan and Sam Neill, will move everyone with aging parents or families with medical challenges, including those currently facing potential loss from COVID. It will be especially powerful, and possibly triggering, to those who have been recently through this kind of loss. Still, love is at the center of the story, and Michell guides the cast in tenderly expressing through something many families will face one day, if not soon.

Susan Wloszczyna: There’s something Big Chill-ish about Blackbird, as an exemplary cast gathers together for a weekend to celebrate the death of Lily, a beloved matriarch. But unlike that Baby Boomer classic, the soon-to-be-deceased person who is in the early throes of a terminal illness is staging her own demise on her own terms. Read full review.

Jennifer Merin Blackbird is a poignant and compassionate drama about a terminally ill woman who is guiding her husband, two adult daughters and their respective spouses, and best friend through a final weekend together — before she ends her life. The highly emotional encounter is beautifully paced with joyful memories and revelations that bring resolution to past trespasses and concerns, some of which are intimate and surprising. Susan Sarandon, magnificent in her portrayal of Lily, heads a brilliant ensemble that creates a sense of familial authenticity. Roger Michell is masterful at directing femme-centric films, and he does a beautiful job with this English language remake of the Danish film Silent Heart. And, the cinematography and editing of this version capture all the nuances of intimacy in this profoundly intimate femme-centric film.

Sandie Angulo Chen: In 1998, Susan Sarandon memorably played a terminally ill middle-aged mother in Stepmom, and 22 years later, she’s taken on another dying mom role in Blackbird, the English-language remake of 2014’s Danish drama, Silent Heart. Although the movie is somewhat predictable in parts, the fantastic cast (Sarandon’s two daughters are played by Kate Winslet and Mia Wasikowska, her on-screen husband is Sam Neill, and her best friend is Lindsay Duncan) elevates what would with less-accomplished actors seem melodramatic. The movie, directed by British stage-and-screen director Roger Michell from a script by Christian Torpe who wrote the original, features nuanced performances that promote the legitimacy of a person’s right to die on their own terms.

Liz Whittemore Blackbird will hit home for anyone who has watched a loved one slowly deteriorate due to illness. Matriarch Lily has requested support from her family so she can die on her own terms. This arrangement comes as no surprise and s everyone has agreed to spend their final weekend together as a family unit and be present for what will come. We see everyone go through the stages of grief and they are messy and honest. And while secrets are exposed and new information comes to light, Blackbird leaves space for truth and real emotion. Read full review.

Cate Marquis At a couple’s gracious, upper-middle class beach side home, the family gathers for a weekend. But this is not ordinary family weekend, but a farewell for the mother (Susan Sarandon), who is suffering from ALS and has decided to commit suicide. Blackbird features a fine cast, with Sam Neill as Sarandon’s husband, Kate Winslet and Mia Wasikowska as the at-odds grown daughters, among others in familiar family drama roles. Everyone holds it together to give mom her wished-for perfect final weekend the first day, but things begin to unravel after that, with revelations, confrontations, and touching moments, in director Roger Michell’s three-hankie drama.