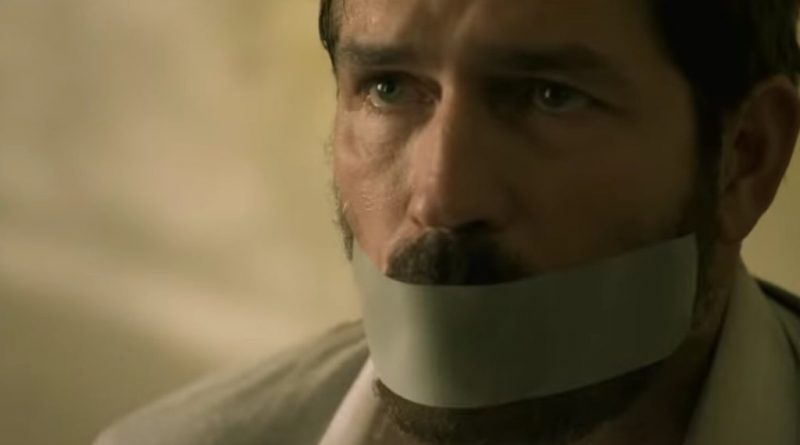 Once upon a time, devoutly Catholic actor James Caviezel was on an ascending career trajectory, having garnered acclaim in The Thin Red Line and The Count of Monte Cristo.

Then came The Passion of the Christ and his outspoken defense of Mel Gibson, who was known to have engaged in overt anti-Semitism. Speaking at the First Baptist Church of Orlando, Caviezel noted, “Mel Gibson doesn’t need your judgment; he needs your prayers.”

Adamantly refusing to separate his faith from his work, Caviezel has declared he would never participate in love scenes, especially if they involved nudity, preferring to follow the path of religious films.

Which obviously led him to Infidel, a tepid thriller about Doug Rawlins, a Christian preacher/blogger who deliberately infuriates Muslims at a conference on religion in Egypt, gets kidnapped by Hezbollah and winds up in prison in Iran, accused of being an American spy. His wife Elizabeth (Claudia Karvan), who works for the US State Department, then goes to Iran to try to free him.

As depicted in writer/director/producer Cyrus Nowrasteh’s script, Rawlins shows an arrogant disdain for the Muslim faith, proclaiming on Cairo television: “Jesus is God, and he wants to be your God.”

He’s not only rude but also disrespectful of Muslim beliefs. It’s like going to the Vatican and openly criticizing the Pope’s faith.

Ostensibly about human rights abuses and corruption, the concept defeats itself. Even his captor Ramzi (Hal Ozsan) admits, “We take this shit far too seriously“- urging: “Just tell them what they want to hear, and this will all be over.” But Rawlins is determined to be a martyr.

And since the opening shots show Rawlins facing a firing squad on a Tehran rooftop, we know from the getgo what’s inevitably going to happen.

On the Granger Movie Gauge of 1 to 10, Infidel is a faith-based 5, preaching to the choir.