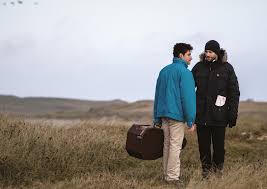 A Syrian refugee awaits the deposition of his asylum request in a state of discombobulation on a remote, rural island in Scotland’s Outer Hebrides in writer/director Ben Sharrock’s low-key melancholy drama. There is plenty of low-key humor in the vein of a Local Hero era Bill Forsyth (and like that film, even a glimpse of the Northern Lights) or Finnish auteur Aki Kaurismäki, but the comedy is overlaid with the sadness of a young man far from friends and family who has no guarantee that he will ever see any of them again.

English actor Amir El-Masry is Omar, whose misery is compounded by the fact that he is a musician, but he has a broken arm, rendering him unable to play his oud. Nevertheless, the instrument is so much a part of him that he carries it everywhere. His closest companion is Farhad (Vikash Bhai), an Afghan and Freddie Mercury stan, whose ebullience is a marked contrast to Omar’s moroseness. The two of them share quarters with two refugees from Africa, Abedi (Kwabena Ansah) and Wasef (Ola Orebiyi). The four of them are part of a small community of others in similar limbo, dropped into a place so foreign to them and so remote that it might as well be Mars.

This is a drama of observation, character, and mood. Not a lot happens. Omar walks long distances to get to the village’s pay phone to call his parents, who have themselves sought refuge from Syria’s civil war in Istanbul. The calls are frustrating as the subject always seems to turn to his brother, who stayed behind to fight. Unable to play his instrument or work without papers, Omar spends most of his time roaming the island. The locals aren’t exactly welcoming, although not exactly unwelcoming. In one exchange, a car full of young people hurl racist invectives at him – only to then cheerfully offer him a ride.

Sharrock turned to inspiration for his story to Syrian friends he met when he was studying in a prewar Damascus. That reality informs Limbo‘s sense of verisimilitude that even its most absurd flights of humor never pierce. Omar is a stand-in for so many people all over the world, stateless and with no idea when or where they may ever feel at home again.