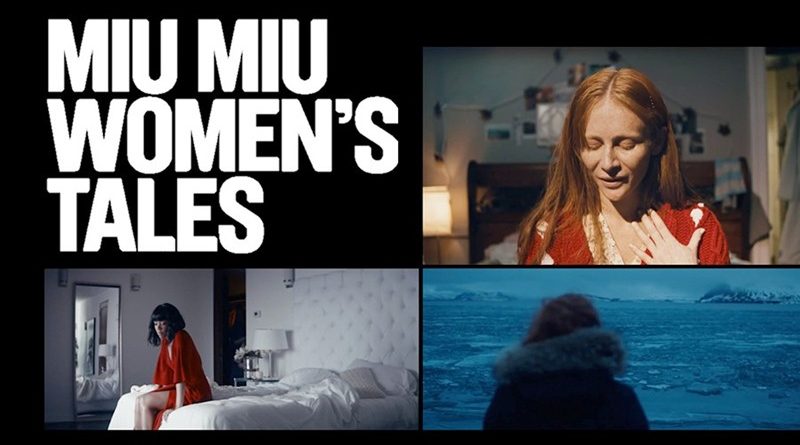 For roughly the past decade, Italian high-fashion brand Miu Miu, a subsidiary of Prada, has been commissioning and releasing short films from some of the world’s most renowned women directors. As long as the films include Miu Miu fashions and accessories, the directors have been free to express their own creative impulses and personalities. Within the series, film fans will recognize signature flourishes along with great invention.

For example, Belgian-born French director Agnès Varda’s whimsy is on full display in Les 3 Boutons (2015), a fairy tale that features Miu Miu designs festooned with buttons and Varda’s beloved goats. Black American director Ava Duvernay forwards her interest in female empowerment as she casts Gabrielle Union as a broken-hearted woman who is uplifted by her female friends in The Door (2013). Other entries span a wide variety of subjects, from skateboarding (Crystal Moselle’s That One Day, 2016) to gender dysphoria (Małgorzata Szumowska’s Nightwalk, 2020).

Following are some of the best films in the series, starting with the newest addition: French-Senegalese director Mati Diop’s In My Room (2020). Diop, who burst onto the international scene with her evocative, feature film debut Atlantics, had the unique challenge of filming during and commenting on the pandemic. As atmospheric as Atlantics, In My Room features views from her high-rise apartment, including the bluest of skies and dramatic sunsets. She also gazes at the activities of her neighbors in other parts of the housing complex, assembled alongside the words of her late grandmother, whom Diop recorded on film shortly before her death. The confinement and costs of the pandemic are thus rendered in very human terms.

In what is arguably the best of the Miu Miu series, acclaimed Argentine director Lucrecia Martel literalizes what many people think about fashion models—that they aren’t really human. Her 2011 short Muta (“mutants”) pulls a bevy of Miu Miu-costumed models out of the bowels of a fantasy ghost ship and has them react to the possibly toxic Earth air as they move about the ship in approximate human ways. Muta has some of the dimensions of a horror movie, but Martel’s riff on the stereotype of models betrays her sly sense of humor.

American director Hailey Gates’ Shako Mako (2019) stars the brilliant Alia Shawkat as an actress starring in an army training film. Although she is half-Iraqi, she is unconflicted about helping U.S. troops learn how to fight Iraqis because her career is all she can see in front of her. Shawkat is both foolish and endearing as she runs roughshod over other actors and real-life amputees brought in for the shoot, exposing both the shallowness of ambition and the camaraderie of people thrown together in a restricted setting.

Saudi director Haifaa Al-Mansour’s The Wedding Singer’s Daughter (2018) is an unsparing look at the gender and class divides in Saudi society, as the female guests at a wedding drape themselves in Miu Miu finery and dance together as a wedding singer played by Saudi pop singer Rotana Tarabzouni entertains them. Several young girls at the reception look down on the singer’s daughter (Haylie Niemann), whose mother they have been taught is a slut. When the sound system goes out, though, it is up to the daughter to save her mother from a barrage of insults by finding and correcting the source of the problem. Even as we are dazzled by the fashions on the wealthy guests, Al-Mansour is more impressed with the heroism of those who serve them.

American director, dancer, and choreographer Celia Rowlson-Hall’s (The [End) of History Illusion] (2017) is an apocalyptic ballet in which slick promotional advertising encourages people to abandon the toxic wasteland above ground for the simulated life pleasures below it. Miu Miu fashions help Rowlson-Hall project the fantasy of a luxurious, carefree life in a bunker, but the breakdown of the natural environment is mirrored in the collapse of the simulated world. Ultimately, this tale of loss told through a variety of dance styles transitions from humorous to hopeless.

American actor-director Chloë Sevigny collaborated with comedian Carmen Lynch on the semi-documentary Carmen (2017). Filmed in Portland, Oregon, the first part has Carmen deliver a monologue at a comedy club that serves as a voiceover for the lonely, sometimes creepy times she faces as she looks for love. There is no laughter, which makes the performance not only sad in its content, but also in its failure to entertain. Although Lynch gets laughs in the end, it is impossible to forget the real pain of the experiences she lampoons.