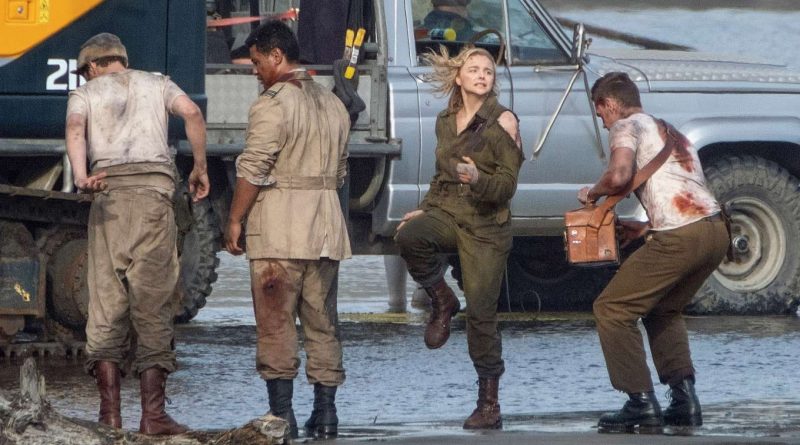 Kick-Ass‘ Hit-Girl, Chloë Grace Moretz, is all grown up and still in fighting form in this delirious blend of action and horror from New Zealand. This is one of those glorious movies in which what audiences are missing because of the pandemic becomes crystal clear. Yes, it had its world premiere as part of Midnight Madness at the Visa Skyline Drive-In at City View at the Toronto International Film Festival, screening live for those lucky few who did not have to watch it virtually. But even that experience does not compare to a packed Ryerson Theatre in a normal festival year, where one could count on 1200 souls packed to the rafters, hooting and hollering at Roseanne Liang’s exuberantly entertaining second feature.

The less said about the plot the better – there is a lot to give away that viewers should discover on their own. Suffice it to say that Moretz is Maude Garrett, a WAAF officer who arrives at the last minute for a flight on a B-17 bomber at the height of World War II. The all-male crew wants nothing to do with her, but the orders she bears places her in their company. They extract their revenge by ceaselessly taunting her over the radio after assigning her a seat in a gun turret in the belly of the plane. One might think those claustrophobic confines would be a drawback. The reality if far from it in this rip-roaring, sci-fi-tinged, wartime adventure yarn penned by Liang and Max Landis.

Shadow in the Cloud is like a big hit of dopamine, pure pleasure. Roseanne Liang keeps the tension high and the action flowing, but her ace is the fly girl in the turret. Chloë Grace Moretz inhabits this fearless woman with grace, athleticism, and elan. Ten years after Kick-Ass, she is still a superhero.