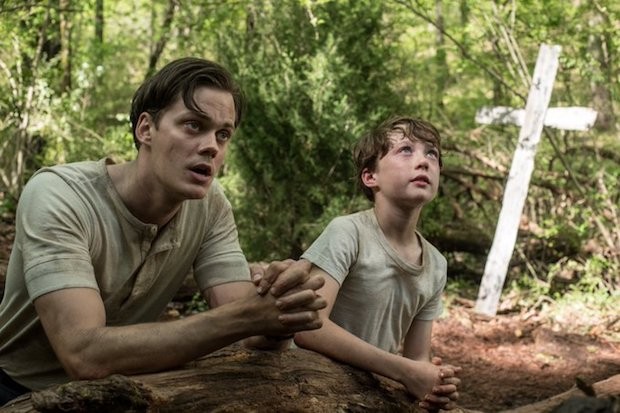 If this dreary dirge didn’t have an all-star cast, it would never have been green-lit – and, sadly, the actors cannot save it.

Emma’s already caring for another orphan, Leonora (Eliza Scanlen), whose crazy preacher father (Harry Melling) killed her mother (Mia Wasikowska) in a religious fervor, believing that he would be able to resurrect her.

Meanwhile, a crooked sheriff (Sebastian Stan) is tracking an amateur photographer (Jason Clarke) and his wife (Riley Keough). She’s the sheriff’s sister who worked in that diner with Charlotte. Their diversion is to pick up hitchhikers and force them to engage in sex rituals which lead to their violent demise.

Based on the novel by Donald Ray Pollock, who laconically narrates the sprawling, convoluted noir plot, it’s adapted by director Antonio Compos and his brother, Paulo Campos, with too many confusing, intertwined flashbacks/vignettes, wallowing in lurid, demented depravity.

The Gothic backwoods characters are so superficial that they fail to elicit sympathy or even empathy on the part of the audience. While Bill Skarsgard (best known as Pennywise the Clown in It) and Tom Holland (best known as Spider-Man) deliver creditable performances, Robert Pattinson’s nasal whine barely passes for a Southern accent.

On the Granger Movie Gauge of 1 to 10, “The Devil All the Time” is a grimly voyeuristic, futile 4, not worth your time.