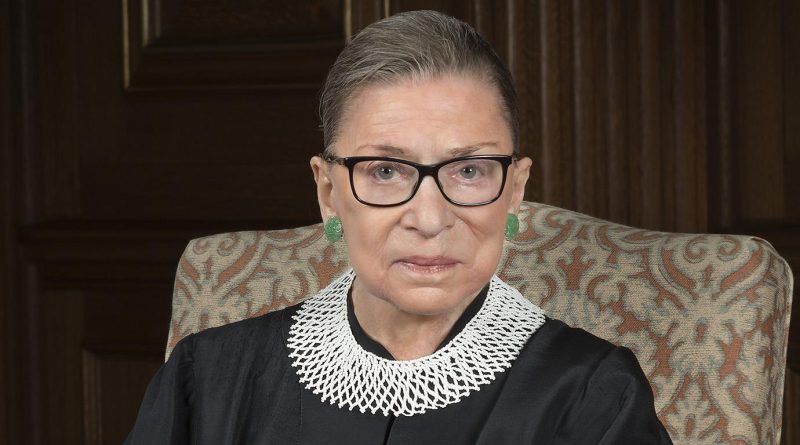 Not all cinema superheroines wear capes. In fact, one leader in the league of heroic women whose accomplishments are celebrated in cinema was the wearer of black robes and white lace collars, and she has been as much of a superheroine in real life as she has been on the screen. Supreme Court Justice Ruth Bader Ginsburg, who died on September 18 at age 87, championed women’s rights for her entire career and leaves a legacy of progressive positive change in the United States. Her ethos and accomplishments were celebrated in two recent films, RBG, the documentary by Julie Cohen and Betsy West, and Mimi Leder’s On the Basis of Sex, a narrative feature starring Felicity Jones as Justice Ginsburg. Both films were released in 2018, both were selected as AWFJ’s Movie of the Week at that time. Both effectively serve to raise awareness about Ruth Bader Ginsburg’s extraordinary character, career and accomplishments.

The AWFJ also recognized Justice Ginsburg as one of 50 iconic REAL REEL WOMEN, a list honoring feminist leaders whose real life stories have been illuminated in dramatic features. On The Basis of Sex dramatizes Ruth Bader Ginsburg’s struggle for recognition at Harvard Law School and her emergence as a leading ACLU attorney dedicated to the cause of equal rights for women. Her life was replete with many other stories that would make great films.


In her Ruth Bader Ginsburg capsule bio and overview for the REAL REEL WOMEN list, AWFJ member Sandie Angulo Chen wrote: “Ruth Bader Ginsburg has gone from respected to revered. She may not have been the first woman to sit on the highest court, but she has definitely had the most impact on public consciousness. In Betsy West and Julie Cohen’s documentary RBG (2018), Justice Ginsburg is presented as something of a superhero, a living feminist legend complete with her own action figure. One of only nine women to enter her Harvard Law School class, the studious and determined Mrs. Ginsburg not only juggled her home life and course load, complete with sexist professors, but she also took care of her devoted husband, Marty, as he endured a bout with testicular cancer, and nurtured their baby. Before her career as a judge, she was a law professor and a pioneering gender-equity attorney responsible for arguing some of the most seminal gender-related cases in modern legal history. In Mimi Leder’s On the Basis of Sex (2018), British actress Felicity Jones plays Ginsburg from her first day at Harvard, through her inability to find work in a law firm despite her a stellar academic record, through her first years as a law professor at Rutgers. The film climaxes when she argues Moritz v. Commissioner of Internal Revenue before the U.S. Court of Appeals for the Tenth Circuit, movingly and successfully showing that discrimination on the basis of sex hurts both men and women.”

In real life, Justice Ginsburg founded the ACLU’s Women’s Rights Project in 1972 and led the ACLU in critical legal battles for almost a decade after, including the cases that established the foundation for the current legal prohibitions against sex discrimination in this country and helped lay the groundwork for future women’s rights advocates. She mentored young women attorneys at Rutgers Law School. She was a determined advocate for the Equal Rights Amendment, pushing for ratification in 2020. For a detailed righteous account of Justice Ginsburg’s impact on civil rights and the quest for justice read the ACLU’s In Memory of Justice Ruth Bader Ginsburg (1933-2020).

EDITOR’S NOTE: In addition to articles mentioned above, you may also be interested in reading: