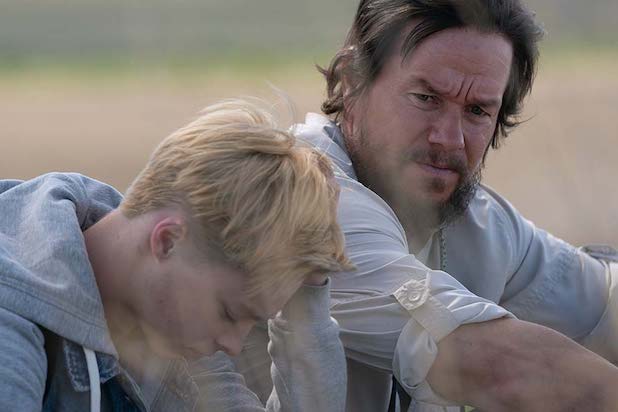 It has been 15 years since Larry McMurtry and Diana Ossana won the Oscar for their screenplay for Brokeback Mountain. Since then the writing partners penned a 2008 miniseries, Comanche Moon, but nothing else – until now. With their pedigree on the script and Mark Wahlberg in the starring role, Good Joe Bell‘s world premiere at the Toronto International Film Festival should have been an occasion for celebration. Instead, to call the film a disappointment is an understatement. What might have been a compelling story of a father’s quest for redemption is, instead, a flabby melodrama that plays like one of those old Afterschool Specials.

Based on a true story, Good Joe Bell follows two tracks. In the present, working-class Joe (Wahlberg) pushes a cart along American highways as he walks from his home in La Grange, CA, to New York City to raise awareness about bullying. Every so often, he stops to awkwardly lecture on the topic – he is no public speaker – typically to high school students, but if a captive audience at a truck stop café presents itself, he is game.

The reason for Joe’s trek is his teenage son Jadin (Reid Miller). Joe is consumed by the memories of the torments visited on his sensitive, gay child. Jadin is out and proud and the sole boy on his high school’s cheer squad, and so the school bullies – in particular, most of the football team – have made him their special project. Joe and wife Lola (Connie Britton) are concerned, caring parents who try to intercede on Jadin’s behalf, only to get push back from school administrators. And when Joe is honest with himself he realizes just how much he has contributed to Jadin’s torment – only grudgingly accepting of his boy’s sexuality and embarrassed that Jadin roots for instead of plays on a team.

Good Joe Bell goes off the rails from its opening scene. Anyone who knows the Bell family story will immediately recognize just how wrong this introduction to Joe is. Those who go into the movie cold are likely to deduce the truth because the scene is staged so awkwardly by director Reinaldo Marcus Green. He is hampered by a screenplay that imposes a relationship between Joe and Jadin that is patently false.

From that beginning, the film has nowhere to go but down. Wahlberg, so good in action movies, struggles in a role in which a long walk takes the place of flying fists, gun play, and car chases. Any actor might have foundered playing a character that is thinly written and is stranded in a film less interested in telling a story than in teaching a lesson. The Bells are reduced to symbols of problems that plague society. Flesh-and-blood people deserve better.