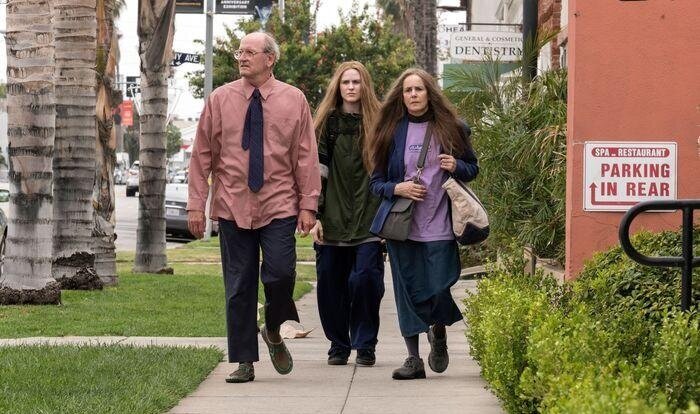 To put it nicely, Miranda July’s cinematic output is a bit of an acquired taste, one that is sweet and sour, twee and tart, in equal measure. That was the case with her first full-length feature, 2005’s You, Me and Everyone We Know, which put her on the map with an ensemble of lonely folks looking for someone to love.

Her latest dramedy outing has a bit of an upgraded cast given that it stars Debra Winger, Richard Jenkins and Evan Rachel Wood as the Dynes, a Los Angeles-based family of oddball grifters who are constantly looking for screwball ways to bilk others instead just holding down jobs. Her parents treat their mousy 26-year-old daughter – who is quirkily named Old Dolio — more as a handy accomplice than beloved child. And the only way Wood’s character can please them is by pulling off scams. Not since the Coneheads have there been such an absurdly out-of-touch clan.

Winger and Jenkins should be applauded for sinking themselves into these unlikable on-the-make characters who lack the wherewithal to truly go all Oceans 11 with their tricks. But the beating heart of the tale that will keep you watching is a wonderfully deadpan Wood, who speaks with an oddly husky voice, hides her face behind a heavy veil of Rapunzel-like hair and disappears into her too-large tracksuit. When the larcenous trio win a flight to New York City, Wood proudly comes up with the idea that they pretend to lose a piece of luggage and make off with $1,000-plus check thanks to travel insurance.

The main plot finally kicks in when they meet Gina Rodriguez’s Melanie, an attractive and congenial young Puerto Rican seatmate on the plane who is quite tight with her own mother. She becomes intrigued by the Dyne’s activities and soon suggests her own scam. Of course, Old Dolio becomes a bit jealous – especially when a pregnant stranger asks her to attend a mandatory prenatal class, which opens her eyes about how normal parents bond with a newborn. As the film concludes a bit too obviously, love eventually conquers all.

For me, the best part of the film comes in the form of the rundown office space that the Dynes use as a domicile of sorts from a landlord who runs a bubble factory next door and weeps constantly, especially when their rent continues to be overdue. That is when July provides us a visual gift as pink soapy foam regularly cascades from the ceiling in their rented space like liquid cotton-candy clouds. Like magical art insulation, I could watch those scene of the Dynes scooping the goop into containers all day long.