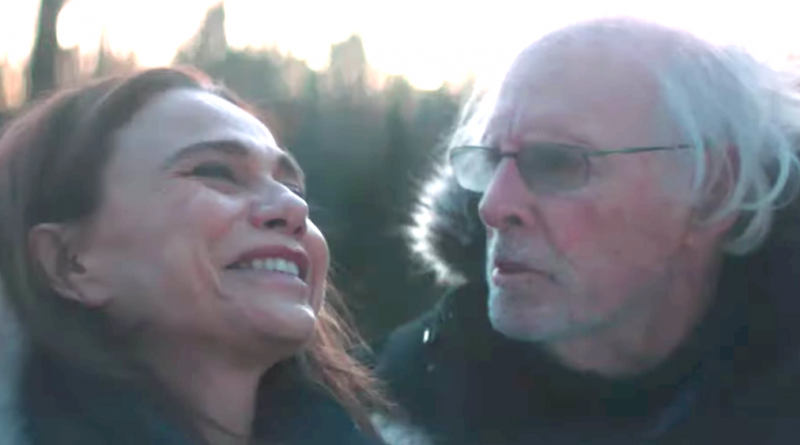 “Why do we paint?” celebrated abstract artist Richard Smythson (Bruce Dern) asks. “We paint because we have no choice.”

But his much younger wife Claire Smythson (Lena Olin) is faced with a different choice. How will she support her elderly husband now that he’s been diagnosed with Alzheimer’s/dementia?

“I’ve given up on many things in my life,” she tells Angela (Juliet Rylance), Richard’s long-estranged lesbian daughter from a previous marriage. “But I never gave up on your father.”

Devoted Claire has put aside her own painting career to serve as her husband’s caregiver/muse. In an interview, he acknowledges: “I create the art. She creates the rest of our lives.”

Yet their serenity will never been the same. Claire is helping Richard prepare for his final show as his memory deteriorates and his behavior becomes more boorish, particularly when Claire invites Angela and her six year-old son Gogo (Ravi Cabot-Conyers) to celebrate Christmas with them in the Hamptons, along with the Danny (Avan Jogia), the young musician who serves as Gogo’s babysitter.

As Claire tries to connect with her own creativity and reclaim her identity, she’s encouraged by fellow artist Ada Risi (Stefanie Powers) who strips for a graphically nude ‘fashion shoot.’

Swedish actress Lena Olin delivers a graceful, sensual performance, not unlike her turn as a free-spirited painter in “The Unbearable Lightness Of Being” (1988). Olin has collaborated with her husband Lasse Hallstrom on “Chocolat” (2000) and “Casanova (2005) and will star in his upcoming biopic of little-known Swedish artist Hilma af Klint, who died in 1944.

Written by director Tom Dolby, along with Nicole Brending and Abdi Nazemian, the pulpy plot’s not only predictable but somewhat similar to the Glenn Close/Jonathan Pryce 2018 drama “The Wife.” Although it evokes memories of the relationship between Lee Krasner & Jackson Pollack, it was apparently inspired by events experienced by Dolby’s parents; his father was famed sound engineer Ray Dolby.

On the Granger Movie Gauge of 1 to 10, “The Artist’s Wife” is a submissive 7 – streaming on iTunes and Amazon Prime.