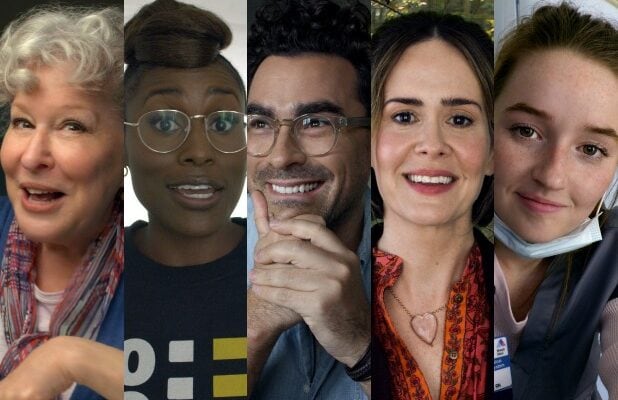 Anyone who has followed Paul Rudnick’s career and appreciates it knows to keep following, nuisance-close lest missing a word. He wrote In & Out and The Stepford Wives, and he often contributes to the Shouts and Murmurs humor column in The New Yorker.

The Coastal Elites outshines his every other brilliance. Its grapefruit-knife sharpness pares with just the right angle to the left. The television play is compassionate and true and (this is Paul Rudnick) very funny.

The cunningly circular play comprises five acts by five characters. Each angry, searching “coastal elite” is caught up in the current pandemic and caustic politics. Miriam, a New York Jew — and danged proud of it — holds season tickets to the Public Theater, and she loves her New York Times. Clarissa, who teaches meditation in front of a green screen, traveled west from Vermont for the lockdown only to find her family sure the virus is a hoax. In high school, Mark dressed for a Halloween party as Julianne Moore in The Hours. Callie was classmates with the First Daughter, who wants to be her friend again. Nurse Sharynn, who came to Manhattan as a volunteer, cares for a patient named Miriam.

“I’ve never met anyone like you,” she declares. “What–” asks Miriam, “–a strong, independent woman?” “No,” says the nurse, “one with so much Kleenex stuffed in her purse.” That dialogue, delivered in monologue, typifies Rudnick’s control of language and character. He has Callie describe I. Trump’s store-bought smile, and he genuinely understands Mark’s existential crisis.

It is only right that Rudnick’s incisive words are spoken with energy by five fine actors: Bette Midler (so divine); Dan Levy (ain’t it the Schitts?); Sarah Paulson (Carol); Issa Rae (not Insecure at all); and Kaitlyn Dever (not just Booksmart) as the nurse in the heart-breakingly hopeful end (ask Miriam for a Kleenex). Each is pointedly directed by crafty Jay Roach (Bombshell) to elicit the best performance.

The Coastal Elites expands what it means to manage these agonizing days with heart and soul, laughter and vinegar. It streams on HBO for your delectation.