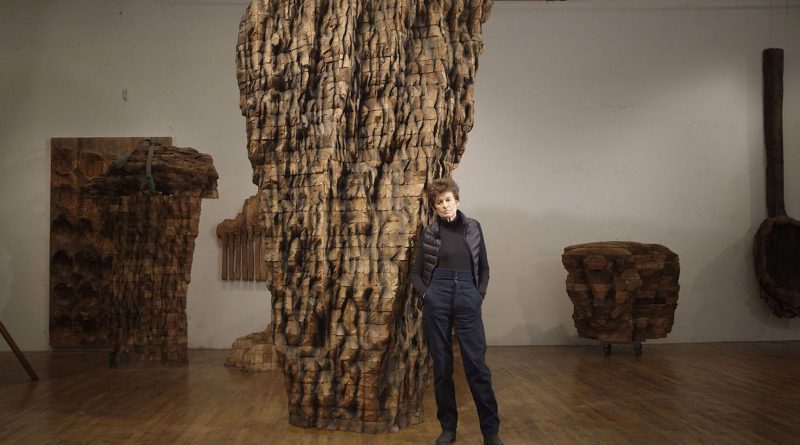 The theory that great art comes from great pain just may be validated in Daniel Traub’s moving documentary about Ursula von Rydingsvard, the acclaimed sculptor whose massive works reflect a past she continues to grapple with and explore.

Born in Germany in 1942, von Rydingsvard was one of seven children. Her father was physically and emotionally abusive, and she admits she’s grateful she was able to channel her anger and pain creatively.

After World War II, the family spent five years living in a camp for displaced persons in Poland, which became the unlikely inspiration for her art.

“Everything was made of wood,” she remembers. “There was a kind of safety that the wood gave me.”

Using cedar as her primary material, von Rydingsvard started creating towering abstract forms which art historians call “evocative of the human condition.” Their shapes and breathtaking fluidity have a primal quality that connect on a visceral level. You can feel their power – but what you really want to do is touch them.

In fact, von Rydingsvard encourages that, and wants people to literally leave their mark on them. “There’s acid on the tips of your fingers that can eventually eat away at the patina, and I like that look,” she says. “It’s like the look of the Buddha’s belly that gets rubbed, and that part shines from all the rubbing.”

Into Her Own is, in many ways, the perfect tribute to von Rydingsvard. It’s as quiet as the soft-spoken artist herself and it moves at its own gentle pace, much like her own laborious, time-laden work.

As Traub follows the progress of von Rydingsvard’s two-year journey to create “Uroda,” a 19 foot tall sculpture made from more than 3000 hand-pounded pieces of copper, commissioned by Princeton University, we get to see the artist in her natural habitat surrounded by the team of skilled craftspeople who help bring her visions to life. Their camaraderie and respect for each other is so refreshing in this age of divisiveness and conflict, and the movie is a wonderful respite, giving viewers the rare opportunity to immerse themselves in beauty and thoughtfulness for an hour.

Even at a mere 57 minutes, this documentary is a rich introduction to the work of one of the few women making sculptures on this scale.

The only way Traub could have made a better movie about this artist whose work begs to be touched would be if he could have found a way for us to reach through the screen.