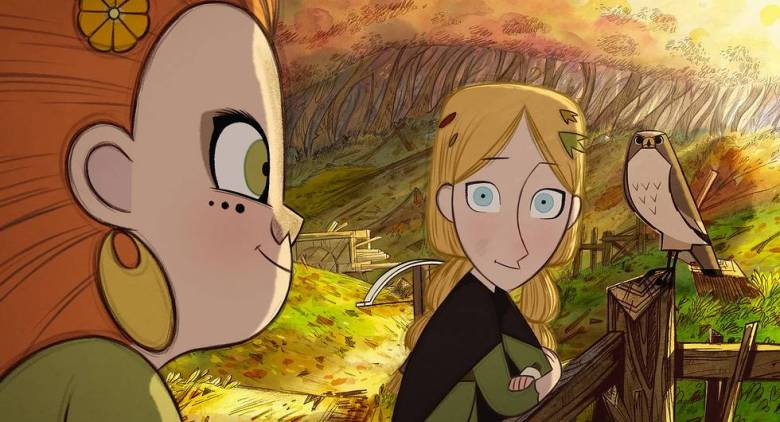 Wolves have long had a place in Irish mythology. The team behind The Secret of Kells and Song of the Sea adds their own spin to that folklore with their latest enchanted and enchanting bit of animation. Set in County Kilkenny in the seventh century, it blends a barbaric tale of English colonization and a saga of wolves and their human familiars and places at its center two spunky little girls moved to rebel against an adult world that endangers all that they love.

Robyn (Honor Kneafsey) and her father Bill (Sean Bean), a hunter, are interlopers themselves to the village. Lord Protector Cromwell (Simon McBurney) has imported Bill from England to kill the wolves outside the gated walls. Robyn desires nothing more than to be just like her dad. She is not allowed to accompany him, but sneaks into the woods, anyway. There she meets Mebh MacTire (Eva Whittaker), a truculent, flame-haired child with teeth like those of a saw. Mebh dismisses Robyn as a townie and is enraged that Robyn wants to hunt her beloved wolves, but the girls get over their initial animosity and Robyn begins to see the wolves through Mebh’s eyes.

There is a lot going on within a speedy 103 minutes. Within the village walls, expressions of the Lord Protector’s cruelty abound. Citizens are put in stocks for minor infractions. Women and children, including Robyn, are expected to labor in the castle. Robyn is assigned to the scullery then to mopping the castle where she gets a closeup glimpse into the Lord Protector’s savage world. Bill has his own problems working for an unreasonable boss and finding unexpected challenges in culling the herd and his rebellious daughter.

Wolfwalkers limns a dark picture of the Middle Ages, of a people under subjugation and animals in danger. Balancing that are moments of great humor and the magical world that is the province of Mebh, her mother Moll (Maria Doyle Kennedy), and the wolves. The vintage animation style favored by the production company Cartoon Saloon would not be out of place in an old Fractured Fairytale cartoon – and perfectly fits this fantastic fable that will bewitch children and adults alike.