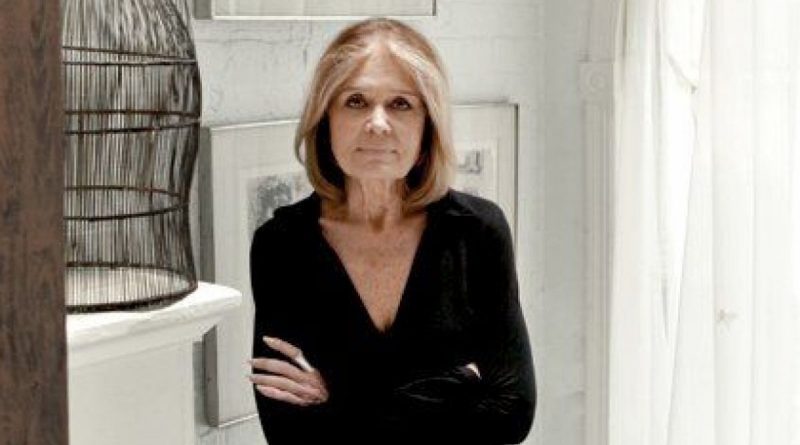 Gloria Steinem was still numb with disbelief when we spoke just hours after the death of her old friend, Ruth Bader Ginsberg.

The purpose of our chat was for a very different and joyous reason – to talk about Julie Taymor’s adaptation of Steinem’s memoir, My Life on the Road, into a dazzling feature film starring Julianne Moore and Alicia Vikander.

“I was so moved that they wanted to do it,” she says of the illustrious actors who signed on to play the activist at various ages in The Glorias.

Nontheless, her thoughts keep returning to RBG, who was only just a year older than Steinem. 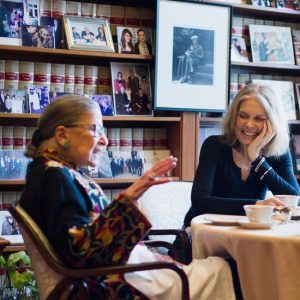 “It was a shock and a surprise. Somehow I had persuaded myself that, if not immortal, she would at least be there for a while because she had kept conquering her health challenges,” she says, speaking from California’s Santa Barbara where she was taking a respite from her beloved New York home.

“I first met her [RBG] when she was at the ACLU where she founded the Women’s Project. I saw her a few times in Washington and once we were lucky enough to have tea together in her chambers at the Supreme Court.

“What is most memorable to me, and perhaps this will change over time, is that Ruth was there before the movement; she was a one-woman movement. She started the Women’s Rights Project at the ACLU; she understood that reproductive freedom and reproductive rights were fundamental when there was no such expression in the law yet. That was the first project we worked on together.

“The last time I saw her was in the Supreme Court building and it just struck me how much power was in this frail body, that here was this enormous building that she became exhausted just walking up the front steps, and here she was a person who, when she sat on her chair on the court, you could hardly see her head above the bench and yet as a mind and a spirit and a conscience, and a humor and a presence – she’s the one Supreme Court Justice that entered the popular culture. There’s RBG shirts and dolls and a movie. She was extraordinary.”

Ask Steinem, 86, why this cinematic story of The Glorias is still relevant today, she is typically modest, “I think the individual viewer is the judge of that but the struggle of diverse women to be human beings goes on as the MeToo movement as safety against sexual assault on campus; it’s in every country in the world.”

Aghast at the very real threats against women’s reproductive rights, she says, “It is the first oppression because controlling reproduction which means controlling women’s bodies is the beginning of every hierarchy from Hitler onward and long before that. So it is timeless and intrinsic and we have advanced a great deal but we are certainly not in a place where gender and race and class are not dominating our lives.”

She certainly hoped the Women’s Movement might have come further by now. “In the 60s, we didn’t have Equal Pay legislation or even the idea of Equal Pay, indeed the notion was that women were taking men’s jobs away. Now we at least have legislation but we are nowhere near the reality of equal pay. If we just had equal pay for the work that women are already doing, we would put something like $400 billion more into the economy.

“And if men were as responsible for raising children as women, that would be a huge economic revolution and also a human revolution because men would develop their so-called feminine qualities – which are not feminine at all, of course, but just human – of a connection and empathy and caring and attention to detail, in the same way that women are also developing our so-called masculine qualities for being in the paid labour force because there are no masculine or feminine qualities; there are human qualities,” she says.

If Steinem remains a force to be reckoned with, the National Geographic dubbing her “the world’s most famous feminist”, she remains tireless, literally only visiting Taymor’s film set for less than a day.

“They did a lot of the shooting in Georgia, and there was a big like an airplane hanger with a Greyhound bus in it and I was there for a day but that was the only time I was there,” she says nonchalantly.

With Bette Midler playing Bella Abzug, Janelle Monae as Dorothy Pitman Hughes and Lorraine Toussaint as Flo Kennedy, she was charmed by Timothy Hutton’s portrayal of her father, Leo Steinem.

“I was very moved by the portrayal of my relationship with my father because he was not an easy person. He was very untraditional and, in many ways, an irresponsible person but it didn’t matter because he loved me and treated me as a buddy,” she says.

Having waited until her 60s to marry, Steinem’s happiness was cut short when her husband animal rights activist David Bale (father of actor Christian Bale) died from lymphoma less than three years later.

If some staunch feminists criticized her for marrying, Steinem argues that the timing was right, “Women no longer had to go to court to get our own names and credit ratings back, marriage had become a legal partnership, all thanks to the women’s movement, and David, who was born in South Africa, had only a residency permit that was about to expire. We were in love, Wilma Mankiller, Principal Chief of the Cherokee Nation, offered us a Cherokee ceremony at the National Reunion, and it was like a harmonic convergence.”

Roadside Attractions releases The Glorias on September 30th, 2020 on Digital and Streaming Exclusively on Prime Video.