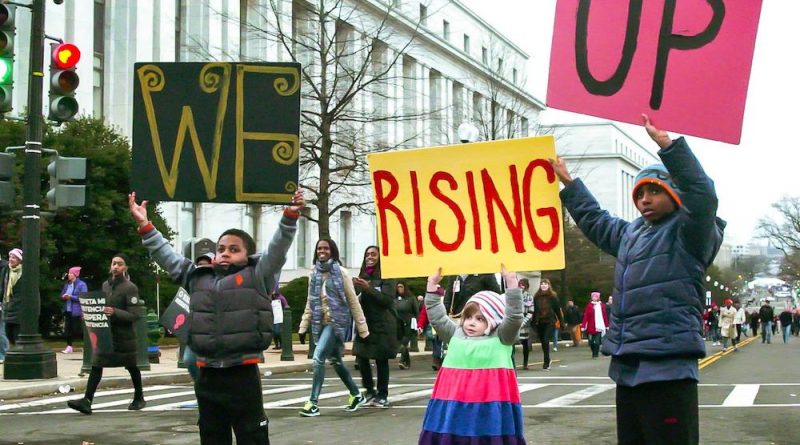 I haven’t played — or even thought about — anagrams for decades. Until Resisterhood’s title reminded me that “sister” and “resist” share the same letters.

But the subject matter of this new documentary is no game.

It’s a call to action for those opposed to, and hoping to end, Donald Trump’s presidency in 2020.

Resisterhood primarily focuses on the two-year period between Trump’s 2016 Electoral College victory and the 2018 “blue wave” that put Democrats in control of the U.S. House of Representatives.

As the stark advisory that precedes the documentary notes, however, “The pandemic and social unrest raging through the U.S. in 2020 exposed the fragile state of our democracy. But the warning signs have always been there.”

Our current pre-election turmoil provides an unsettling undercurrent for Resisterhood’s account of six activists who share the same goals but have very different backgrounds.

We first meet them, assembling like Avengers on Jan. 21, 2017, for the Women’s March, which drew thousands to Washington, D.C., the day after Trump’s inauguration.

There’s psychologist Jean Gearon, following in the footsteps of her suffragette great-grandmother, Edith Hooker. Historian Margaret Johnson Morrison has been on the march since 1965, when she joined the historic Selma-to-Montgomery, Ala., protest.

Also in the crowd: soccer player Joanna Lohman, a self-styled “Rainbow Warrior” for LGBTQ+ rights; grandmother Mimi Hassanein, born in Egypt, who began volunteering by baking baklava for the PTA; and Rep. Luis Gutierrez (D-Ill.), whose wife Soraida encourages him to join the Women’s March.

But that’s only Day One. As Resisterhood marches on, it documents other gatherings — against Trump’s Muslim travel ban and immigration policies, for reproductive rights and gun control … and beyond.

Making her feature debut, director Cheryl Jacobs Crim (an award-winning television producer, director and editor) intersperses vivid protest footage with insightful interviews exploring why this Resisterhood is driven to, in Graber’s words, “not stick our heads in the sand and say ‘This is horrible.’ We need to do something about it.”

Watching Morrison’s 12-year-old grand-nephew proudly join the National School Walkout for gun control — or Hassenein, decked out in a star-spangled hijab emblazoned with the words “VOTE VOTE VOTE,” campaign for local office — give Resisterhood a refreshing, and welcome, note of hope for change.

Even as the truths we’ve always held to be self-evident seem more vulnerable by the day.