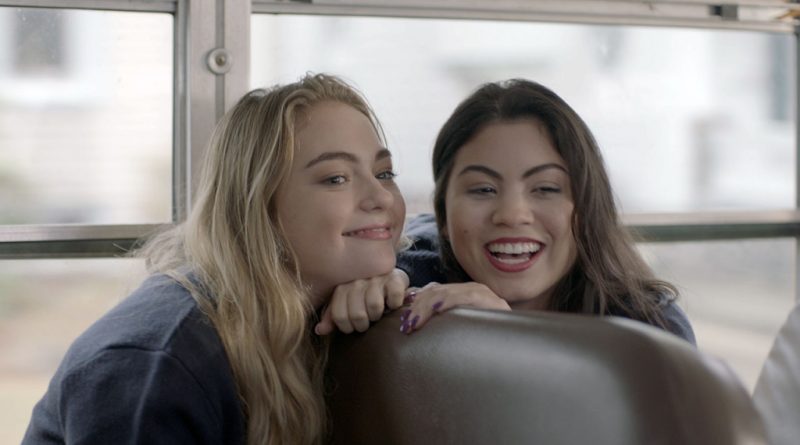 The best thing that can be said about Sno Babies is that it knows what kind of film it wants to be. An anti-drug drama intent on detailing all of the ways that illicit substances are harmful, and all of the unpleasant — and stereotypical — outcomes they can lead to, it’s basically an amped-up after-school special that’s trying to scare its viewers with relentless bleakness. It aims for Requiem for a Dream’s grit and Kids’ shock value, but it’s told with all the nuance of South Park’s “drugs are bad, mkay” school counselor Mr Mackey. Misery is the message here, and while there’s no doubting that that message comes through loud and clear, that’s all this struggling feature achieves.

In Sno Babies’ opening scene, teen protagonist Kristen (Katie Kelly) is given oxycontin for the first time by a male classmate, then told that she’s “not so boring after all”. Those watching can be forgiven for expecting that a host might pop onto the screen at that moment and explain that, no, doing drugs doesn’t make anyone cool or less boring. Indeed, it feels like an act of restraint that this doesn’t actually occur. When the film picks up 15 months later, the top student might be working towards attending Princeton to the delight of her realtor mother Clare (Shannan Wilson), but both Kristen and her best friend Hannah (Paola Andino) are secretly heroin addicts. A plethora of terrible fates await them as a result, from date rape and pregnancy to arrests and overdoses, with the seemingly idyllic facade that surrounds the pair’s middle-class suburban lives crashing down as their drug dependency grows.

A laundry list of overt clichés trying to push the same point over and over again also awaits the audience. Kristen and Hannah’s lives are eventful, but in a box-ticking way that ensures that every potential unwanted consequence of taking drugs comes to fruition. If the duo isn’t shooting up into their scabbed toes, their tongues or their nether regions, they’re driving to a shady part of town to score and receive lectures from a sleazy dealer, and trying to cope with boys who only want one thing. And, they’re doing all of this without raising any concern with the adults around them, because pointing out that teens will get up to all sorts of mischief if their overworked parents aren’t paying enough attention ranks among Sno Babies’ forceful statements.

There’s a difference between unflinching and repetitive. It’s easy to confuse the two, thinking that spiraling further downwards is a sign of unwavering commitment to the cause, but that’s not how Sno Babies plays. It doesn’t help that first-time feature director Bridget Smith and her screenwriter Michael Walsh devote more time to making their characters cycle through as many awful drug-fuelled destinies as possible than to actually fleshing out said characters. Accordingly, viewers barely feel as if they know anything about Kristen and Hannah, other than their habit, their friendship and the fact that they’re on a fast track to doom if they don’t redress their ways fast. They could be any ostensibly normal high schoolers with dark secrets, which is part of Sno Babies’ point — and, while Kelly’s efforts to invest Kristen with more depth don’t go unnoticed, she can’t patch over such purposely flimsy, one-note material.

Also proving pushy and overblown is the film’s soundtrack, which hits dark and ominous notes each time the narrative doubles down on Kristen and Hannah’s woes (that is, often). And, via soft alt-rock tracks, the feature also overlays lyrics with phrases such as “the belly of the beast” and “shame on you” atop supposedly momentous scenes. With this in mind, that the film stresses faith as an alternative to its characters’ choices will come to the surprise of no one. What may genuinely astonish audiences, however, is the attention paid to a subplot about the potential sale of a nature preserve involving a couple (Jane Stiles and Matt Lombardi) who are keen to start their own family. It links in with the main narrative in a number of ways, but it’s emblematic of a movie that is as scattered as it is unsubtle.