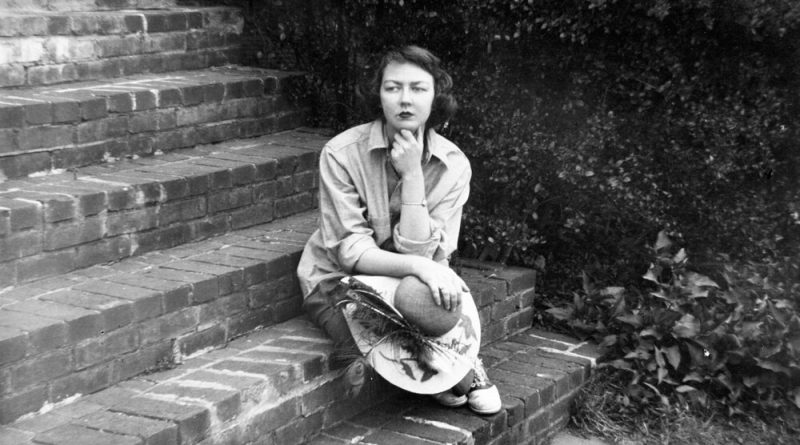 English majors prick up their ears at the sound of that one word, of Flannery, for it signifies the name of one of the finest writers in American literature. But for non-English majors, this exemplary documentary on the life of Flannery O’Conner gives more reasons to admire that genre.

Mary Flannery O’Conner was born in 1925 in Savannah, Ga. She died when she was only 39, broken by lupus, inherited from her beloved father. In those nearly 40 years she produced such classic short stories as A Good Man Is Hard To Find, Everything That Rises Must Converge, and Wise Blood, plus the novel The Violent Bear It Away.

She was shy, but not timid, and she was crippled, depending on crutches. She was Roman Catholic, attending mass daily. She raised peafowl at the family farm, Andalusia.

Her words appear on the screen next to a peacock feather. That graphic is but one of the amazing aspects of Flannery, the documentary. Another is that the people invited to speak about her in this film salon are her friends, Sally Fitzgerald and Maryat Lee; her publisher, Robert Giroux; and her biographer, William Sessions. The notable writers — Hilton Als, Tobias Wolf, the Alices (McDermott and Walker), and the Marys (Gordon and Karr) — don’t just pass classroom judgment on her: they really know her and her work, intimately. “She shows the fantasy of whiteness,” observes Als.

Mary Steenburgen narrates from O’Conner’s works, and as she and the writers read O’Conner’s words, the screen fills with animation. Saints and freaks, prophets and misfits float across. References are made to O’Conner’s television dramas and to films based on her work. Brad Dourif, who starred as Hazel Moats in Wise Blood speaks about that role and its crafter. John Huston, selected for his atheism to direct that film in 1979, appears, like O’Conner herself, in archival footage.

St. Louis native Fr. Mark Bosco and Elizabeth Coffman wrote and directed this fantastic documentary. “Flannery” comes out exactly a year after another astonishing biodoc, “Toni Morrison: The Pieces I Am.” Together, these documentaries prove the agency of film in keeping women writers’ lives alive — and not just for English majors.